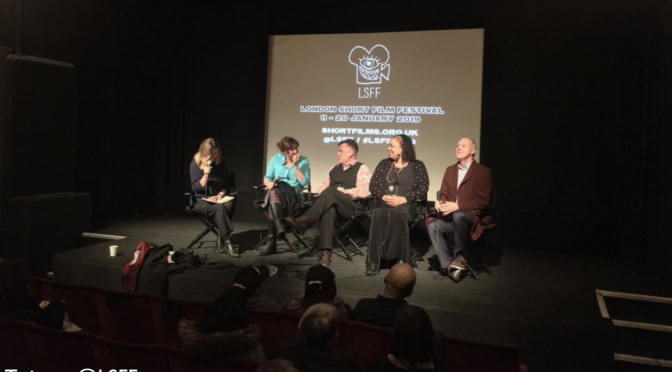 Opening night of a film festival is always something to behold; the chatter of cinephiles who fill the halls of the lobbies and rooms, eager to consume this year’s delights. As an ode to the greats, those of the eighties who are now some of the most established directors within the industry; LSSF Presents their collection as commencement. Nestled on the banks of South London, the Institute of the Creative Arts is a perfect contemporary home for filmmakers and creatives alike – one of many stretched across the city to host the festival.

The decade of rebellion, revolution and righteous wonder.

From the run down suburbs of Swindon, WHEN I WAS A GIRL, explores the life of Ann; and the complexities of life in a lower-class household amidst her parent’s torrid marriage, entering the world of womanhood, sexual discovery and accepting attitudes of the time. In an era of post-WW2, those who had come to London in search of a new start had to rebuild after a fractioning of society and values. Anne embodies this in her acceptance and appreciation of her situation, with the casual rebelliousness of youth. One of the most striking aspects is her interactions with others; the pensive stare of contemplation, fascination and amusing intrusion. She cares little for other’s privacy, watches and internalises it all and expresses her awakenings in the most candid of fashions. The piece ticks through in a beautiful format, with a surprising clarity for a low-budget period drama. The overlaying of her voice helped the audience to connect with the nostalgia of the piece, as many in the audience were of later generations. Yates masterfully composes the film in a sequence of switch back shots, in a not-unfamiliar Kubrick manner. It is very much of its time, with Anne having to face her mother’s abandonment and father’s abusive alcoholism, that encompasses such serious topics but without exaggeration – this for many was a reality and reflects the keep-calm-carry-on propaganda mentality. As a short comprising of direct repetitive shots, clever narrative and frankness, it delivered commendably well.

To find the initial words to describe KLIPPERTY KLOP, perhaps the most apt expression is literally to be: dumbfounded. A post-punk short with the most quizzical, dialogue announcing one’s exploration of primitivism. Shot on a Super 8 and dubbed by Kotting himself, the bounding energy becomes disorientating as the maniacal circles in which he runs through the field blurs and scratches with each verse. The scenes are grained into disrepute, but in a captivating manner that you cannot help but succumb to the madness despite the obscenity of the apparent bestiality. His horse blanket remains by his side as he gallops obsessively, pausing only to squirrel under it before bursting back into the lines with such ferocity. It is aesthetically neat with bold tones of the darkened grass and mud emphasising our unhinged need for repetitive structure and how this collapses, to embrace the bizarre. Fascinatingly amusing in its intrigue of early experimentation,

PLEASURE ISLAND is one of the briefest pieces, stemming at only two minutes but heart-warmingly familiar to all. The reminiscent beauty of days at the seaside by the fairground, passionately bold colours of the rides, calming rhythm of the baking sun and holiday goers lounging on a lazy afternoon. To smile at the teens blasting music out of their cars and staring off their neighbours in humorous fashion, to the OAPs napping in the heat of the day. The vivid paint palette of brash shouting colours is smile-inducing as it takes us all back to the days of summer and escaping the city fogs. Salter delivers this uncomplicated, gentle and wonderful piece in its brief entirety.

Barnard’s early work is somewhat familiar to that of a still art piece in its structure and composition, comparable to that of fruit in a bowl with its direct black curtain background and character poised looking directly into the lens. The monologue is conducted about the discussion of how unsatisfying potato peeling is, but her prolific enjoyment of apple peeling per say. The detailed description of the textural enjoyment emits this sensory fascination and directness. How one becomes some caught up in the details of repetitiveness, almost a mockery of a 1950’s housewife spending her days preparing food and letting her lonely monologue run, our ease of slipping into the same conversations and overanalysing them to the extent they just become tiresome or absurd. The close set shots sat beautifully in each of minutes that ticked by, as you shook your head laughing but also feeling strangely sad in the literal stillness of her life.

The sheer tenacity and nature of LONDON STORY flows directly from start to finish, as Potter narrates this politically charged, brilliant short. One might have mistaken the opening to be of a visiting tourist, its deception running as she ‘interviewed’ those working in the government buildings she was photographing. The true nature was their intentions to erupt the conservative system, done in a complete mock crime manner. The minimalist composition of the film managed to carry a frankly retold cliché story line in a sharp, focused manner that came across as witty and worthy of applause. The characters had an air of silent film humour, the still shorts allowing them to take up the space of each location which was beautiful in its existence. The final scene is simply iconic in how it encapsulates the story in a sultry pasodoble on the riverside of Southbank, with the protagonist’s scarlet dress contrasting the grey hues of the city in the most assertive manner, confident in her manipulation yet sharing in the success with her accomplices. Their movements mimic each other in perfect synchronisation, as they mock their interruption of the parliamentary system which was complexly divided at this point in history to say the least. Simply marvellous.

The first few moments of COFFEE COLOURED CHILDREN comes across as a celebration of diversity and unity of those from all different backgrounds, integrated in this warm collation of day to day life. But within moments one is the plunged into the harsh reality. The children of the film grew up under the care of their single mother, who was white, and they of Nigerian heritage. As the first mixed race children to move into a white neighbourhood during a time of conflicts of segregation and institutional socialised racism, it was to be no simple childhood. The horror that you are initially struck by is the smearing of dog excrement on the door of their home and shoved through the letterbox; the frame cutting back and forth from the young girl to the door, monologue the self-hatred she had of her skin. For at such a young age to notice the inequalities of race, the taunts from other children who knew no better than their parent’s ideologies, and the portrayal of black people in the media. Devastating and infuriating in equal measures how the two young children furiously scrub their skin in frustration and coat themselves in Vip powder, attempting to lighten their skin, to feel an association to their mother and the hopes that the change will bring about their hopes for the future. What is so exceptionally profound is the detailed torment, the image replication of her as a young girl and her as an adult in synchronisation – a fear that carries through to her adulthood and struggles. The seamless movement between documentary footage and current disparity of their state of mind is trancing, overlaid by cockney rhymes and childhood music box chimes. The concepts of struggling identity of not only skin colour but British identity perforate through the film in a deeply complex and moving manner, that shows the slow progressiveness of current society but in many respects echoes the efforts we must still make.

To close this selection of shorts in the Blue Monday category, was Temple’s BICEPS OF STEEL, a ridiculous yet not inaccurate homage to the rebellious rock and punk music that took over the decade completely. A band’s stage crew member is the centre protagonist, shown heaving vastly huge amps into the gig venue with his exacerbated bulging forearms. The band kick off in a righteous manner, rather reminiscent of Steel Panther and Deff Leopard, with moshing and lights and music video style panning of the chaos. Amusingly their security look like a group of incarcerates who become a bit too violent controlling the crowd, which causes the body built stagehand to intervene. However, this dreamlike state incurs with smoke lights and what may only be assumed as a groupie bestowing her love upon him, a hint towards the mono-romantic music which also grew in this period. There is a light-hearted sexual and euphoric atmosphere of the piece, even with a caged gimp drummer, which is a reflective looks at the other side of the Eighties, of the punk sub-genre and underground rock movement. It is not taunted at or mocked, but a contemporary reflection of the progressive music scene that became iconic, and the dreams of members who assumed the rock and roll lifestyle would be glittering and iconic; when in reality, only the greats truly make it.

After the screenings, LSFF welcomed Yates, Kotting, Slater and Onwurah to the stage for a brief discussion of what it meant to make film in 1980’s Britain and provide some contextualisation, as part of the ‘Now That’s What I Call 80’s’ panel.

Onwurah: During this time you would just shoot on whatever you could get your hands on. Back then it was exciting to get your hands on 16mm, and now you can digitally look for this effect, when for us it was just scratched by mistake. When I was making the film, it was closure. This is what happened, this is the end. I understand, let’s move forward. It looks like an old film but it’s still so relevant now. I hope nobody is watching this in 30 years and thinking, this is my narrative. There is a sense of politics and identity in the film which became a political discussion of race and its very of its time. The language and concepts do belong to the 80’s.

Yates: It was a vibrant time for funding and support, the EU actually funded so much art in Swindon! Swindon had had the shit kicked out of it, all the rail jobs had gone, and they funded my films and despite Thatcher and the turbulence, there was this counter wave. It was a turbulent time and intense period, everyone was making a stand and many creative opportunities arose which greatly helped me. It was rife with rampant neoliberalism.

Kötting: ‘I was still living through punk. This was way before digital so there was inherently a lo-fi aesthetic to everything, everything on Super 8 and I didn’t know what I was doing, I still don’t! And I think this is a vestige or that, of that something in the air.” #LSFF2019

Salter: “Everything was DIY, I actually discovered a tripod for this film, it was all self taught and I’d just discovered Super 8. My first film I actually got delivered developed in an envelope and there was nothing on it because I’d forgot to take the lens cap off” #LSFF2019