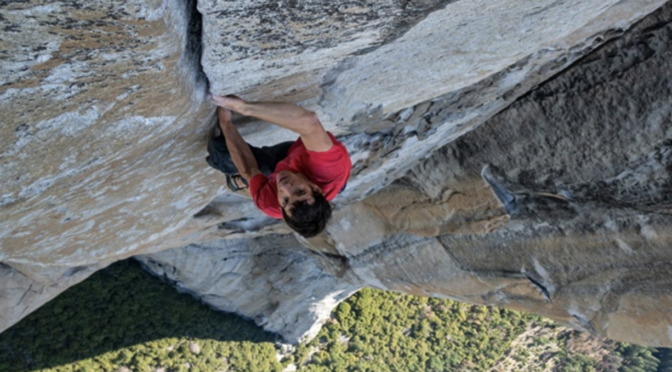 FREE SOLO is a documentary focusing on the efforts of experienced climber Alex Honnold to free solo – that is, to climb alone with no safety ropes or equipment – El Capitan, a rock formation in the Yosemite Mountains that is roughly 3000ft from bottom to top. Obviously this is a ludicrously dangerous endeavour, and the documentary spends a great deal of time delving into the psyche of a man who does this kind of thing all the time.

Alex Honnold rose to fame after the 2010 release of ALONE ON THE WALL, the first in a six part film series called First Ascent by Sender Films, which depicts Alex in 2008 free solo climbing the 2,000ft wall of Half Dome, another rock in Yosemite. Alex also currently holds the record for the fastest climb up Half Dome. Alex wrote a book named Alone on the Wall about his climbing feats, and the documentary begins with Alex on the tail end of his book tour.

The title of the book sums up the dilemma this films presents: while Alex is capable of accomplishing these astonishing feats he does so at the expense of the emotional wellbeing of those who care about him, and as a result of both this and his own introverted personality he is distant from others. He is alone as a free solo climber but he is also alone as a person.

This is especially telling when we are introduced to his girlfriend, who he met on the book tour. She is willing to stay with him in the van he lives in, and accepts his exploits, although she is clearly unhappy at the idea of him getting hurt. But when things do go wrong he admits his impulse is to break up with her. At one point another climber says that while he personally thinks their relationship is great for the both of them he worries that it might distract Alex in his attempt, and distraction cannot be allowed under any circumstances, else Alex could fall to his death.

The distraction the filming of the documentary itself poses is also a concern. Unusually for a documentary the filmmaker Jimmy Chin and the rest of the camera crew appear on screen, openly displaying concern for Alex and co-ordinating with him to make sure the cameras are as unobtrusive as possible, even at one point offering not to shoot the free-solo attempt itself if it will make Alex more focused (it is filmed in the end, and very effectively). Alex is aware of the impact it would have on the filmmakers if they film him plummeting to his death. 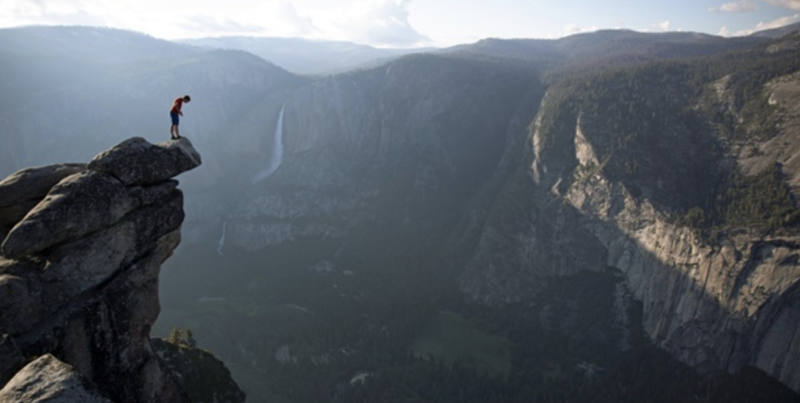 Alex is also fully aware of the massive risk he is taking himself, but he doesn’t express any fear. During the course of the filming another free solo climber Alex knew personally, Ueli Steck, died after falling almost 3,300ft down the Nuptse Wall. According to Alex, Ueli told Alex that climbing the Nuptse was about squeaking it out on the right day, and Alex calmly remarks that it “clearly wasn’t his day”.

The emotional disconnect is commented upon frequently by those around him – he’s jokingly called Spock, it’s said that he doesn’t cry, he doesn’t like holiday gatherings and he’s uncomfortable around children. His father never said “I love you” to him, and his mother only ever spoke to him in French as she was a French teacher. He says that he had to practice hugging at 23 as he wasn’t hugged as a child.

There are brief snippets of an interview with Alex’s mother in which she says his deceased father probably had Asperger’s Syndrome, and it is very easy to see similar traits in Alex himself, especially with his singular minded focus. Early in the documentary he takes an MRI scan, and the doctor tells him that his amygdala, the fear processing centre of his brain, doesn’t light up on the scan the way it does in the average person. He doesn’t get scared as easily as the normal person, which might explain why he feels the need to perform ever riskier accomplishments.

Which is why the climax of the film, the successful free solo climb up El Capitan, is remarkable not just for the heart stopping visuals of one man dangling off a cliff face with a massive drop below him, but because this is the happiest Alex has looked in the whole film. The man literally waves at the cameras on his way past. When he gets to the top he’s grinning from ear to ear, and while he still has his matter of fact tone, saying that he ‘feels quite emotional’, it’s obvious how much the accomplishment really means to him.

Overall the documentary is an effectively engaging portrait of Alex Honnold’s personality. It is also a visually impressive depiction of free soloing, but it never glamorises or ignores the real danger a free solo climber is in, and the impact of a free solo climber’s choices on the people around them.

Our thanks to the Cameo Cinema, Edinburgh.