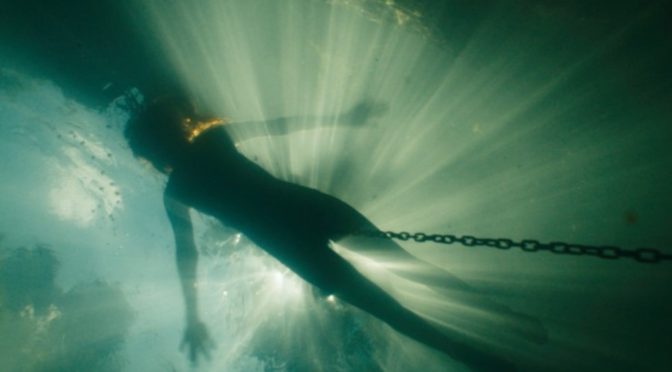 MONOS, directed by Alejandro Landes, is an invitation to open our eyes and see. Beside a bunker at the edge of the world, children play football while blindfolded and, as the film opens, the audience are as blind as the children. We are dropped into an unknown conflict in an unknown country with child soldiers governed by an unknown organisation. Like the children, we remain blind to the brutality of these children’s lives until, under new leadership, the child soldiers turn to ferality, chaos, and murder. MONOS invites us to see ecstatic truth against brutal unreality in a film that uses cinema to its fullest potential.

The child soldiers, the Monos, guard a kidnapped engineer who they call Doctora (Julianne Nicholson) and operate under the command of a leader known only as Messenger (Wilson Salazar). In their isolated bunker with their only role being to guard this prisoner-of-war, the Monos have their own micro-society seemingly with their own rules, rituals, names, norms (or lack thereof), and freedoms about sexuality and gender presentation. References to Lord of the Flies firmly establish this vision of a Hobbesian state of nature.

The most striking part of the film is its gorgeous imagery. Incredible shots of mountainous cloudscapes create images of a precipice on the edge of the world. Clouds, lit from below by gunfire and flares, blanket the world hiding a conflict that, for now, is distant from us. Sumptuous images of jungle foliage freshly damp with dew and bubbles flowing under turbulent rivers invite us to see the beauty of the natural world amidst human violence. Slow pans and zooms evoke Andrei Tarkovsky’s films and, in quiet moments, MONOS approaches the still beauty of Debra Granik’s LEAVE NO TRACE.

But in the moments when the film demonstrates the splendour of nature the most — the moments where its images show what Werner Herzog would call “poetic, ecstatic truth” — darkness follows and intrudes forcefully. After Bigfoot (Moises Arias), Swede (Laura Castrillón), and Boom Boom (Sneider Castro) get high on mushrooms and revel in the forest’s beauty, conflict reaches out to their quiet enclave as beleaguered soldiers fall back to their bunker. After a confrontation with Messenger, a serene boat journey down a river is interrupted by sudden and unexpected violence. The camera continually invites us to see ecstatic truth in nature only to interrupt with the brutality of war.

The beautiful images of reality are also counterbalanced by shocking moments of unreality in the narrative. Unreal and unexplained scenes are welcome interludes to the violent daily lives of the Monos including a mock hunt of one of the children wearing the skin of a slaughtered cow, a short segment of a documentary on Gummy Bears, and the overall Kafkaesque nature of fighting an unknown war while reporting to an unseen High Command. The sense of unreality is heightened by Mica Levi’s hypnotic score made up of drums, whistles, and synth. Ecstatic reality balanced shocking unreality serves to highlight the unfortunate reality of a world that should be unreal: a world where children are made into weapons of war.

MONOS starts with the children and the audience blinded and ends with our eyes fully opened to its brutal unreality. As the ferality and madness of the jungle recedes, we are faced with a tearful and accusatory stare as one of the children looks straight into the camera while we, the audience, are asked “What should we do with this unidentified person?”