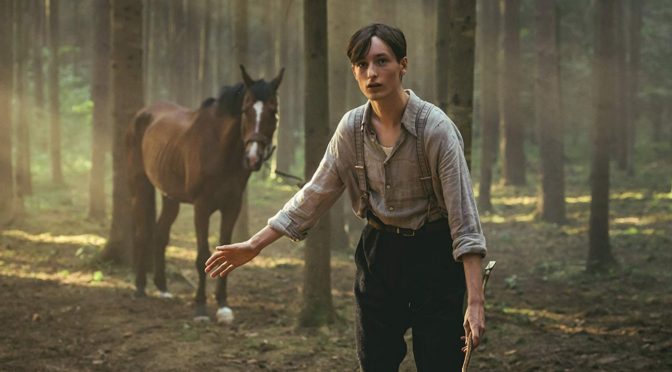 If one had fallen in love with the breath-taking landscape pans of THE REVENANT, then I guarantee that anyone in their right minds would be stylistically wooed by Hans Moland’s latest Norwegian creation. OUT STEALING HORSES is a rich, emotionally-charged drama that philosophically delves into the core foundations of human interaction, and permits all buried heartfelt pain to spill out onto the screen.

Based on Per Petterson’s 2003 novel, this adaptation tentatively reconstructs the tale of Trond who, having recently lost his wife, escapes to the country and unwittingly ends up having to confront his past. In the opening scene, the viewer’s perspective is birthed from the submerged edges of the creek, and are given a tour of this remote hinterlands between Sweden and Norway that the characters reside in. The forest feels protecting as opposed to foreboding, allowing those to hide away a myriad of secrets. While curled up in his cabin, he hears the howling of beasts, and ventures outside where he meets Lars, a stranger from his past. Viewers are washed in and out of the past memories and present realities. The story focuses around the summer Trond spent alone with his father in the cabin and the serious of fatalities, romances and conflicts with friends that ensued over their time, and how this changed everything. One could not possibly imagine the drama that ensued from felling timber, but that is where the subtly of the piece works wonders.

A symphony of nature; the rushing of the brook and pattering snowflakes against the window pane as they sweep into the room, the coldness of the ice mirroring the unthawing of his emotions, as he allows the pain of lost love to heal. Frozen in anguish, Skarsgard delivers a consistently beautiful, aching performance that delicately unlocks the burdened emotions of youth. Jon Ranes also takes on this role remarkably well as the 15-eyar old Trond, brandishing the flame of hormonal teenage turmoil in an isolated landscape, a summer that is a world away from his normal life. The relationship between him and his father (Tobias Santelmann), is truly wondrous and emotive, celebrating male vulnerability and the bond between blood. Their interactions are joyous, spellbinding even, with a peculiarly wonderful shot of them nakedly hand standing in the woods after showering in the rain, utterly ridiculous but just brilliant.

Although not always everyone’s taste, the subtle emotions of Scandinavian dramas are so deeply encompassing and profound, that you must delve beneath the surface as he does, reaching every corner and allowing it to flood over you. This requires patience when watching, to allow that understanding to come to you. Mortality is such a complex emotion to unearth, to chip away at what makes us human, the fragility of life and the risks we take to feel. The tactility of the film emphasises this; the falling boughs of the trees almost flatten a man in seconds, as a boy’s hand crushes the embryotic state of a miniscule bird’s egg. Moland’s use of imagery to vividly rip apart these concepts is metaphorically stunning. The story has a very gentle progression too, both father and son’s isolation within the cabin, Trund’s developing understanding of death and how this shifts the moods and attitudes of the town (underlying sinister at the best of times), let alone the summer’s increasing sexual tension and conflicts.

We are made to feel the pain of the characters and forced to watch this inner suffering carried across their lifetime before the catharsis of healing finally comes to an end. We are all merely shadows in the wind, illuminated in the snow until our lights are finally hushed out, leaving only footprints behind. The film intends to evoke emotions slowly, calmly and doesn’t demand brash Americanisation. What is being severely undermined is the poetry of a film, but perhaps this is a more prevalent issue of the time; do we even allow ourselves to search for the beauty in a film instead of the expectation of having it flung at us all the time?

As the landscape shifts through the seasons, so does the young boy’s developing understanding of death that carries with him into old age. Viewers may have been expecting some thriller, Jo-Nesbo-style stand-off in the wilderness, and while this atmosphere is retained, it becomes more about acceptance and reflection – a retribution to their past.