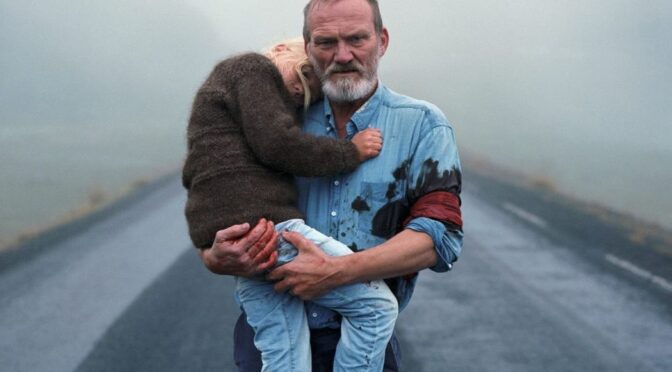 Icelandic director Hlynur Palmason’s psychological thriller is a perplexing and curious watch. The story revolves around Ingimundur (Ingvar Sigurðsson), a former police officer who has recently been widowed, whose his life remains foggy with unanswered questions. His days are spent renovating a home for his family, and visiting former work friends. His granddaughter Salka, played by the impressive Ida Mekkin Hlynsdottir, grounds him and stops him from becoming entirely detached, helping to ease tense moments with family. But the distractions from his loss are not enough as he begins to dig deeper in the past, under the suspicion that his wife was having an affair.

One of the core elements of the film is the use of natural light and the contrasting of fire and snow against the night sky. The whole film is very naturalistic, from the men stripped naked in the showers as they wash off the mud from their rugby game, to the brutal shot of an SUV crashing off the road. The film feels visceral, cold, and perfectly conveys the haunting pain that lays dormant in Ingimundur’s life. The montage scene of the fence-encased house is not a new time-lapse technique, yet it is a delicate accompaniment to the diverse Icelandic landscape. The snow-capped mountains, wandering wild ponies and ever-changing weather are stunning to observe against the backdrop of the stagnant building. These first ten minutes, with a few moments of dialogue, are carried on the legato tempo of violin strings, causing the whole atmosphere to feel rich and full of texture and sound.

“The montage scene of the fence-encased house is not a new time-lapse technique, yet it is a delicate accompaniment to the diverse Icelandic landscape.”

Ingimundur’s relationship with his granddaughter is heart-warming and funny, as she very much echoes the spirit of his deceased wife. The kids in the film are as sharp as cracked ice: their witty responses, eagerness get stuck into all activities, and fearlessness becomes quite intimidating. “Kids don’t think about what adults or old people are doing” is a profound throwaway line from Salka, who is mostly content to spend her days hanging out with her grandfather while he renovates or nosing around the police office. She effortlessly captures the room, her presence is as stoic as Ingimundur’s, but with the feisty spirit of a girl who ensures she receives the full respect and attention from any adult in the room. Salka is very much the anchor of Ingimundur’s crumbling world, sprinkling it with light and warmth as he grapples with his grief, and fearless in moments of confrontation.

“The kids in the film are as sharp as ice: their witty responses, eagerness get stuck into all activities, and fearlessness becomes quite intimidating.”

It is hard to summarise A WHITE, WHITE DAY, with director-writer Palmason having created a feature that feels cathartic in regards to its depiction of loss, but also edges on the border of horror and anger. The performances from both Sigurðsson and Hlynsdottir are unique and refined, their symbiosis is striking and becomes the driving force of the tale. The film joins the company of other recent Icelandic work including THE COUNTY and RAMS, that all harness the emotive resonance of the landscape with pained relationships that find their resolution through climactic vengeful moments.