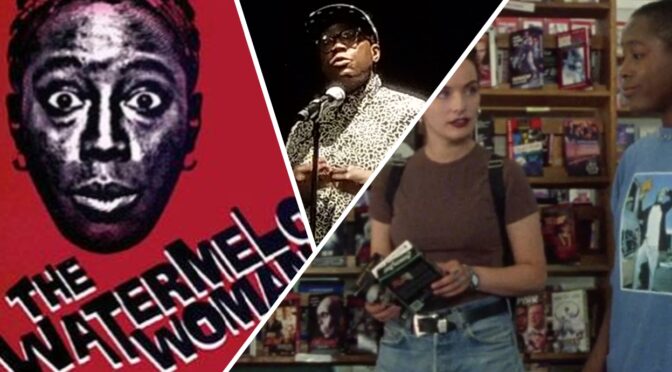 Cheryl Dunye turned 54 in May, and in further celebration it’s time to reflect on her status as a pioneer and a revolutionary figure in progressive cinema for the most marginalised.

Dunye’s avant-garde masterpiece THE WATERMELON WOMAN explores the continual displacement of black queer women; from the Hollywood curtain, to the intertwining stories resonated through the streets, and the people that amplify them. Dunye stars as Cheryl, a young black lesbian who mediates between her day job as an employee at a video store, and an experimental auteur scripting a documentary piece about an old, forgotten actress: Fae Richards, credited only as The Watermelon Woman. As Cheryl penetrates with her lens further beneath the melancholic simplicity of Hollywood’s racial typecasts, the complexities and unique worlds of Fae Richards come to the surface, and the fascinating life that remained undocumented from the limelight is finally told.

“I did the research, I did look in black film history, and found nothing but homophobia and omission.”

The gritty nostalgic setting of Dunye’s directorial debut encapsulates the Gen-Z dissonance of the ‘90s and it is clear that Dunye’s structure is laced with a storytelling arc of self-reflective metaphors, but while the documentary of Fae Richards remains a work of fiction, the realism resides in Dunye’s process projected in the essence of Cheryl’s character and journey. What can be established from THE WATERMELON WOMAN is that the struggle of being black, queer and a woman extends beyond ignorance and discrimination. The canvas of identity can never remove its cracks if it fails to illustrate the histories of the minorities who made the first marks. In Dunye’s position as the first-ever black lesbian feature-length filmmaker, she starkly establishes that the films of New Queer Cinema, and the layers of indie cinema that are generated by the auteurs who have moulded them, have the potential to transform cinema as a medium to capture the lives of the marginalised, the undocumented, and the different.

Many cinema movements that relay the concept of realism seem to have gradually vanished, while Dogme 95 only ever had a small following due to the ambiguity of its process, the fall of New Queer Cinema lies in its newfound distortions. It seems that queer cinema can only survive as a movement if it meets the criteria of the academy, dangerously driven through oppression becoming synonymous with glitz and glamour, proposing the anti-foundationalist model of fantasising about the abyss without having to live it. While we are always waiting for certain sectors behind the camera to catch up and keep up with politics and minority representation, auteurs like Cheryl Dunye have certainly been the catalyst to change in the media. With films like PARIAH and MOONLIGHT, and television shows such as Orange is the New Black, Cucumber, The L Word, Empire, and Pose that are celebrated for their representation of the black queer community; there has been progress. But, as Dunye’s auteurship exclaims: there are a lot more stories to make the screen.