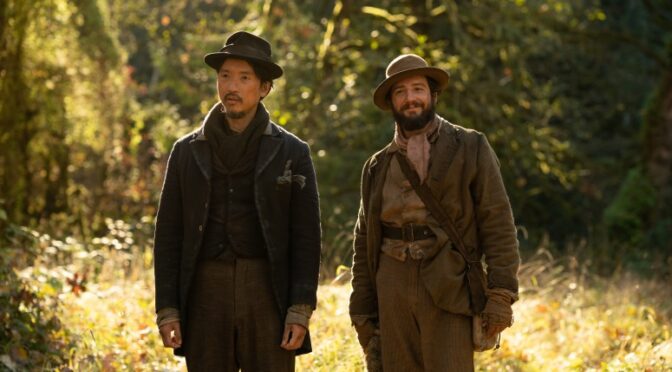 Riding on the cheers from its success at Sundance, FIRST COW floats its way into the competition at the 70th Berlinale with a charming story about the entrepreneurial adventures of two friends and a cow.

Back in 19th-century Oregon, travellers from across the world are settling in the United States, wildly ravenous for the taste of freedom and hope from this new promised land. Our scene is set amongst them crafting their shacks, trading stalls and debating the prospect of earning one’s fortune. Trekking through the autumnal leaves in the evening light, Otis ‘Cookie’ Figowitz (John Magaro) joins a group of fur trappers as they head towards a settlement. Having been ditched relatively soon after arrival, he comes across King Lu (Orion Lee), a Chinese fugitive, whom he befriends and then slowly begins to hatch a plot with, one which makes use of Cookie’s culinary skills. Here is where our protagonist comes in: the chief factor’s prize cow, played by the oddly stunning Evie. With the locals and travellers beginning to tire of salmon and soda bread, Cookie starts to make ‘oily cakes’ with the addition of honey and cinnamon; the artful pair must befriend the cow and whisk away her milk each night for their pâtisserie delights.

In the landscape of the American frontier, this story is not just about its historical context, based on The Half-Life by Jonathan Raymond (who co-wrote the screenplay with director Kelly Reichardt). It explores a more visceral and tactile relationship that humans have with their natural surroundings, the remarkable survival skills we have when needing to adapt to new environments; skills which the modern age does not test in the same way. The imagery is drenched by day in the autumnal sunlight of the Pacific Northwest, and the crisp star-kissed sky of the mountainous terrain. Each footstep is panned across, silence being used to highlight tentative moments without turning it into an overdramatised piece. These visual cinematographic charms are nuanced by the tonality of the genial soundtrack of William Tyler that floats us through the story.

The story is paced beautifully across the two hours; exploring the lives, worries, and ambitions of the settlers and also the amicable peace between cultures of the natives and migrants. Each proud of their heritage, with most of the tensions coming from the British and American infighting; the Native Americans mostly choose to keep to themselves as they watch the newcomers incessantly squabble. The hilarious friendship of Cookie and King Lu is – simply – nice to watch and experience without feeling like something dire is about to happen.

FIRST COW is a simple yet ingenious story that butters up the audience, blending a combination of loyal friendships and the promise of the new world with a Machiavellian plan and a human craving for home-cooked comforts without curdling.