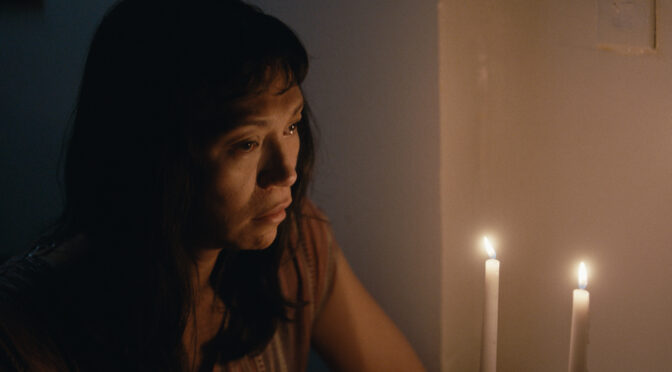 Immigration had a resurgence in the British news cycle last month. The bourgeois press turns the plight of men, women and children crossing the channel in search of sanctuary on this island into a perverse spectacle for an increasingly xenophobic public. As such, the lack of a UK release for Isabel Sandoval’s LINGUA FRANCA (made available on US Netflix since August 26th) feels like a missed opportunity for some semblance of humanity on British screens.

In LINGUA FRANCA, writer-director Sandoval stars as Olivia, a trans Fillipina who works as a carer in Brooklyn for an elderly Russian woman named Olga (Lynn Cohen). Struggling to acquire a green card, and living in constant fear of being taken by ICE, Olivia’s life is marked by anxious precarity.

Enter Olga’s grandson Alex (Eamon Farren), a young man who is trying to put his wild days behind him and become more responsible. Now working for his uncle at an abattoir and living with Olga, he and Olivia start sleeping together. Olivia, though attracted to Alex, is also the more hesitant and guarded of the pair; the reason for which quickly becomes clear. When Alex learns that Olivia is trans, he begins to gaslight her into believing that an ICE raid is imminent.

Scenes of Olivia’s psychological distress are quiet and devastating in equal measure. However, while the film deals with heavy subject matter, it is done so with a deft touch so as not to wallow in abject misery for the pitying eyes of a liberal audience. Instead, the understated tone throughout the film allows for audiences to reflect not just on the story, but also its political implications.

“…while the film deals with heavy subject matter, it is done so with a deft touch so as not to wallow in abject misery for the pitying eyes of a liberal audience.”

The relationship between Olivia, Olga and Alex is underscored by their shared status as immigrants, which serves to highlight the inherent racism of contemporary anti-immigration rhetoric. As a white person Alex, himself a second-generation immigrant through his grandmother, is unaffected by the hostile environment created by successive US governments.

Sandoval illustrates this socio-political milieu primarily through sound. A scene of Olivia walking through the street is made threatening by the soundtrack playing a Donald Trump speech. When describing the film, critics refer to the setting as “Trump’s America” which, while technically correct, elides the fact that predicaments like Olivia’s predate Trump’s election and is instead symptomatic of life within the core of US imperialism. To possess a body deemed other in capitalist society is to feel more acutely the phantom guard’s gaze in the panopticon of modern life.

LINGUA FRANCA is an important film, not just in the sense of representation, but also in the way it portrays the relationship between xenophobic and transphobic logics; how it manifests in individuals who do harm, and how it affects those who become the targets of such prejudices.

Significantly, Alex’s gaslighting of Olivia is motivated by his discovery of her transness through viewing her passport, stolen by one of his drunken friends. The passport comes to represent state power: a document which ascribes identity to an individual, marking them as either inside or outside of society.

Sandoval does an excellent job at conveying Alex’s transition from lover to abuser. It demonstrates how cultural messaging can transform individuals into agents of a state apparatus that normalises the violation of women of colour. Alex’s fury at Olivia’s transness is informed by the casual transphobia of his drinking buddies. After Alex has been shown Olivia’s passport, there is a sequence which follows Alex. Seething in the dark of his bedroom, he watches porn on his laptop, then he is seen driving while listening to news on the radio about the ICE activities. Finally, we see him furiously striking a punching bag at the gym. Sandoval shows us in just a few short minutes how American culture seeps into Alex’s consciousness and informs his later exploitation of Olivia’s vulnerability. The optics of a white American victimising a trans Fillipino woman became even more relevant while writing this review. On September 7th, 2020, President Rodrigo Duterte granted an absolute pardon to Jessica Laude’s murderer, US marine Joseph Scott Pemberton. The case was the subject of 2018 documentary CALL HER GANDA.

This review largely dwells on the politics at play in LINGUA FRANCA, but what makes it truly successful as a film is how those politics are elegantly expressed through narrative and performance to create an emotionally gripping work of art.

“Without such understated artistry in acting and screenplay, the political significance would be rendered mute.”

Sandoval’s turn as Olivia is a psychologically raw portrayal of living in a state founded on white supremacy. Yet what makes her so captivating to watch is that Sandoval’s script highlights the multiple facets of Olivia’s life. The way she cares for Olga, the pressure from her mother in the Philippines to send money, and her sexual longing; all these prisms of experience are given weight by Sandoval’s considered performance. Without such understated artistry in acting and screenplay, the political significance would be rendered mute.

There is so much more that could be said in greater detail about what Sandoval has achieved with LINGUA FRANCA. For instance, there is the gendered portrayal of working-class labour. There is also the relationship between Olivia and Olga, and how the film is another welcome example of care work being meaningfully explored in film. I am sure that the more people watch LINGUA FRANCA, the more we’ll see what else this incredible film has to offer us.