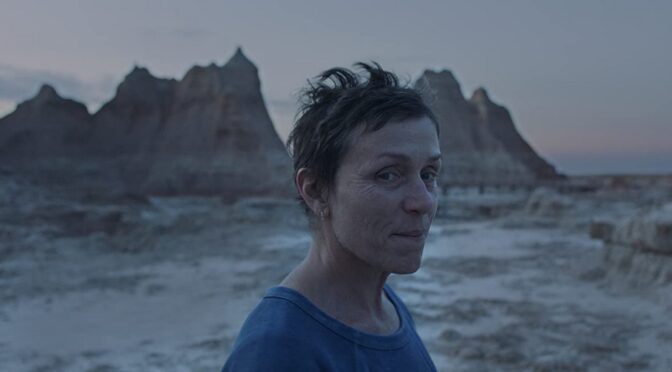 Chloe Zhao’s NOMADLAND is a beautiful and melancholic story embodied with heart and strength by Frances McDormand. Zhao’s film scatters the shattered remains of the American Dream amongst the breathtaking vistas of the ‘land of the free’; a romantic sonnet dedicated to a broken place.

In the aftermath of the town of Empire, home to the workforce of US Gypsum, disintegrating along with the employment, Fern (Frances McDormand) has taken up the life of a ‘nomad’. She lives out of her van and takes on seasonal work across numerous locations in the USA, including an Amazon warehouse where we find her as the film opens.

NOMADLAND makes time and space not only for Fern but the stories of those she encounters and the endless-seeming landscapes they choose to make their home. Numerous shots look through Fern’s driver-side window, framing her amongst sun, sand, snow, and a pack of vans that represents the community she has found in place of the one which was left to crumble.

In many of these places, Zhao tracks Fern strolling across them, the wide angles opening up the world in just the way this lifestyle seems to speak to Fern. It’s beautiful visual storytelling: the world seems open and inviting, yet vast and lonely despite the people surrounding Fern. There is heartbreak at the precariousness of Fern and her fellow nomads’ situations – highlighted by more than one scene involving van maintenance. However, when the film pulls on the heartstrings – notably with music at critical junctures from Ludovico Einaudi – it never feels manipulative or forced. Instead, the sadness underscoring why the characters find themselves here comes through McDormand; a twist of the head or a flash of the eyebrows hinting at the emotional depths under her placid surface. The burgeoning connection with David (David Strathairn) goes largely unspoken by the pair, instead conveyed in the subtlest terms by two acting veterans operating at their peak. Zhao also manages to get performances from the rest of the cast (with many non-actors) that bring some authentic specificity to the story, with Fern seemingly representing many people despite being a well-realised individual.

It is easy to define this piece of work along the lines of Terrence Malick, with the gazing at natural wonder akin to THE TREE OF LIFE. Still, Zhao’s time and care for the people in her film’s script also resembles the humanity of Ken Loach’s work (as well as the use of new faces or non-actors). However, she has created a picture of her own – an arguably much more effective and engaging one than either of those old hands’ recent work. NOMADLAND brings a humanistic kindness to the Malickian imagery and comments and condemns a broader situation without the polemicism of Loach’s recent work.

It is common for films addressing economic precariousness in American society to be seen as ‘a damning indictment’ of the concept of the American Dream. NOMADLAND, however, is not fiery and, as such, damns quietly and indicts no one specific, and instead focuses a calm and loving lens on the people in these beautiful landscapes. Their stories are left to illustrate the confounding blend of freedom and tragedy behind why they find themselves there.