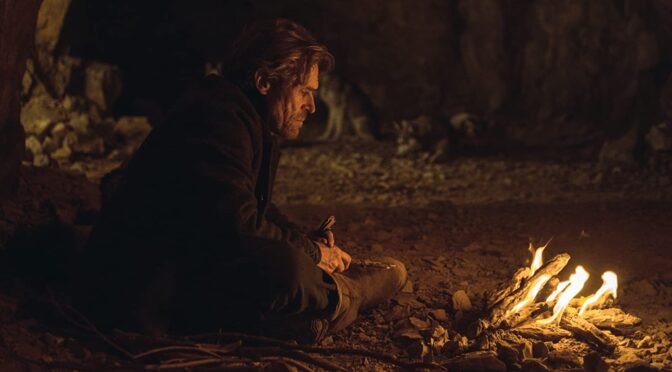 SIBERIA tells the story of a man living in near isolation who goes on a spiritual, picturesque journey with the hope of rediscovering himself. Director Abel Ferrara brings the film to life with actor Willem Dafoe in the lead role, marking the two’s sixth film together.

The film follows Clint (Willem Dafoe), an owner of a small tavern within an isolated snowy location in Siberia, where he welcomes travellers into his home with refreshments before they continue their journey. One night, after a twisted version of Clint appears in front of him within a vision, arguing that he has lost his way and his soul, Clint decides to ready his dogs and sleigh in order to head into the unknown on a spiritual journey.

As Clint goes on his journey, director Abel Ferrara keeps the primary focus on him, which leads to some effective moments that develop him as a character and help to explain why he is currently living in a remote location. Ferrara, along with the film’s cinematographer Stefano Falivene, uses a range of camera shots and angles to help distinguish between each of the outdoor locations that Clint travels to. These choices help to give each location their own characteristics, with the use of low angle shots in the forest location giving it a sense of wonder. Meanwhile, the high angle shots during the desert scene create a sense of foreboding, which is enforced by the lack of light during the scene.

The different scenes set indoors showcases the prop department’s ability to work within the same space, making the set feel different from each location with the change of props and lighting. This is especially prominent during a scene where Clint comes face to face with his wife (Dounia Sichov) and son (Anna Ferrara). They are in a room that is almost identical to Clint’s tavern, which helps to give a sense of security by using a place familiar to Clint. However, this feeling of security disappears with a slight change in lighting on the wife, as Clint realises how the consequences of his decisions have also affected the family he has left behind.

Furthermore, the performances on display are amongst the film’s strongest elements, especially Willem Dafoe’s. He plays multiple different versions of Clint throughout the film, including Clint’s father, which exist with the character’s own psyche. Each of the parts that Dafoe plays have an important role in the direction of Clint’s journey while also bringing some of Clint’s own fears and anxieties to the forefront. Meanwhile, the lack of dialogue within the film makes each word feel important, as Ferrara and Zois’ script gives each actor the ability to paint a picture through the words they speak. This is apparent within Dafoe’s opening monologue, as Clint talks over the film’s opening credits reminiscing about the holidays he used to have with his family as a child, with the descriptive dialogue helping to create a visual image.

The cast and the storytelling choices that director Abel Ferrara makes keep SIBERIA interesting throughout, while each narrative twist helps to give sense to some of the films more obscure elements.