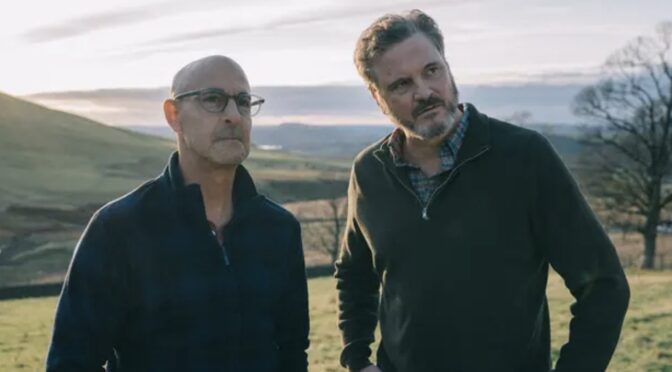 SUPERNOVA is the story of a couple, Sam (Colin Firth) and Tusker (Stanley Tucci), taking a road trip to visit family and friends, with a seemingly innocent plot that hides a growing sadness within.

As revealed during the film’s opening, Tusker has been diagnosed with early-onset dementia, a condition that is slowly deteriorating further and further. While the true extent of his condition isn’t revealed until later, subtle hints are given through Tucci’s performance, where we as an audience are placed with Sam and invited to examine his troubled lover.

Colin Firth plays Sam as someone who is clearly hurting on top of his own insecurities but stays hopeful that his partner won’t deteriorate too fast, almost as if he himself hasn’t truly come to terms with the inevitable yet. There’s always a tense ambiguity to the otherwise charming interactions between the two, leaving a question of whether something is an innocent joke or a crack in Tusker’s composure. This duality makes for engaging scenes, with every interaction hiding secrets waiting to be uncovered.

Subtlety is at the heart of this film, with the true drama of the story hidden behind layers of stoicism that are slowly peeled away with every minute that passes. While Sam and Tusker seem comfortable with their situation, both characters hide their pain from the other so they can continue to enjoy whatever time they have left.

Every scene has a lingering sense of finality, meaning that while these characters are captivating, you fear the end of the film because of the implications it has for these characters. As Tucker describes his situation in a conversation to Sam’s sister, you’re “mourning someone while they’re still alive.” This fear only grows as the secrets simmering beneath the surface come out by the third act, leaving a devastating set of scenes where Sam and Tusker finally come to terms with their situation and its eventual end. The film’s conclusion possesses the same subtle stoicism the film has, providing an ending that is satisfying yet allusive in a way that seems fit to the characters.

An argument could be made that the film doesn’t address the darker implications of its ending or plot, but its attitude towards dementia is more focused on the effects of dementia on its characters than the condition itself. SUPERNOVA doesn’t feel like a story about dementia as much as it feels like a character study about a couple coming to terms with dementia, resulting in an approach that feels harrowingly real through its sensitive portrayal.

SUPERNOVA offers a slow-burning character study that is as charming as it is saddening, told through standout performances by Tucci and Firth inviting you to join two lovers on their farewell tour.