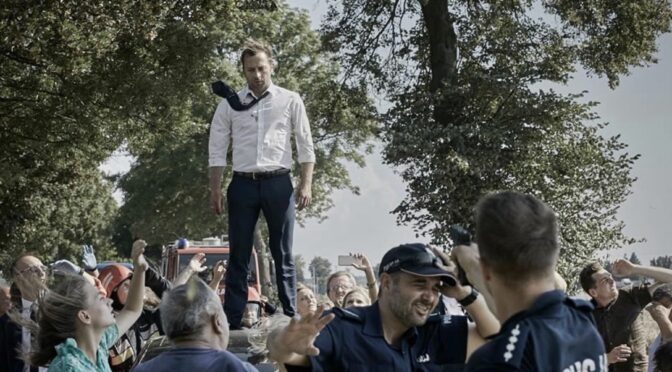 Bartosz Kruhlik’s debut feature SUPERNOVA uses a philosophical and analytical approach to dissolve universal injustices generated by failing socio-political structures. The pace of Kruhlik’s script relentless, and shares the sense of hopelessness and helplessness with the viewer that ominously guides the tone and setting of Kruhlik’s metaphysical world. SUPERNOVA will leave you feeling like a fly on a burning wall with each reveal.

After a politician flees a hit and run, the intersecting tales of families, the emergency services, and politics erupt local residents into a frenzy by taking justice into their own hands against the man they believe will escape prosecution.

Kruhlik paints the analogy of Nietzsche’s butterfly with a stark social realism which ruptures and challenges the idea of a cosmos through a microcosm of chaos, contingency and causation. It almost seems that SUPERNOVA illustrates the dysfunctional products that come from interference with universal maxims; if specific individuals can bypass universal law, then how can those excluded from the hierarchy trust the systems? The film’s narrative is built upon an infrastructure of reactions: from the community’s increasing realisation of the police force’s inferiority to the doubts within the police of their position relative to the socio-political forces at work.

It is difficult to infer whether or not the film seeks to pursue a particular political debate or to ponder a much vaster philosophical miscommunication. From the rapid pace, it seems that SUPERNOVA seeks and expects a mixed interpretation. However, what resonates with clarity is the focus on the setting. The film fixates consistently on the road of the accident: emphasising that the illusion of cause and effect only persists in the eyes of those yet to witness its teleological fallacies.

What works well and coherently throughout Kruhlik’s structure is the fluidity of its composition, it almost seems to operate on two separate levels; making the interpretative model of SUPERNOVA holistically mesmerising. You are given a choice to guide yourself through the metaphysical or the surface level analysis, but with both mirroring the same futility: that the political and philosophical foundations of the world experience the same instabilities. SUPERNOVA summarises what the title suggests; an explosion of forces must expand its initial radius. The words of Edward Lorenz’s metaphor resonate deeply within SUPERNOVA: “If a butterfly flaps its wings in Brazil, does it cause a tornado in Texas?” And with each exploding star, the illusion of the fabrics of society begins to disintegrate.

SUPERNOVA is a mind-numbing feature that will make you want to revisit the ever-expanding crevasses of Kruhlik’s script. It’s a film that sucks you deep inside the questions you consciously refrain from asking, but it reminds you of the importance of the act of questioning before the blindness of conformity. Kruhlik’s feature evaporates into the air with an ever-changing chemical makeup, a mutable compound that changes in accordance with the eyes of each viewer that absorbs it.