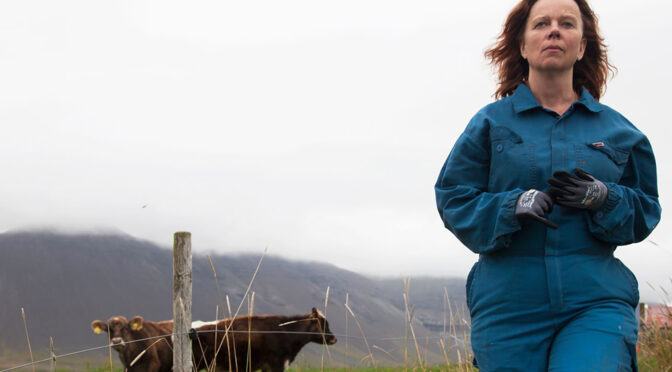 Against a bleak yet majestic backdrop of remote Iceland, farmer Inga (Arndis Hronn Egilsdottir) is delivering a calf. It’s a difficult birth, and Inga attaches a chain to the calf’s feet as she strains to pull it out, refusing to give up and finally succeeding through sheer force of will. It’s a rare positive moment for Inga and her taciturn truck-driver husband Reynir (Hinrik Olaffson) as otherwise their lives are going to hell: debts are mounting and the farm is under threat of repossession.

It’s owned by the local co-operative, formed initially to protect its farmer members against unfair competition, price-cutting etc from larger corporations. The Co-op has now swollen into exactly what it was set up to combat, its comfortable carpeted offices above the store where the locals are obliged to shop using their Co-op credit cards. Any efforts the farmers make to sell their milk to or buy fertiliser from non-Co-op businesses are not just discouraged but spied upon – by Reynir, who’s been persuaded to fink on his neighbours as a way of keeping the landlords off his back.

Inga discovers this after Reynir’s body is pulled from the wreckage of his truck at the bottom of a ravine. The police aren’t satisfied that it was an accident and suspect suicide; Inga suspects that he has been driven to it and after a troubled night in her now-solitary bed she takes to Facebook to denounce ‘the Mafia’ that the Co-op has become. Inga’s action rattles the community and her defiance in sticking her head above the parapet seems to be leading to the inevitable – which in Hollywood terms would be one person’s lonely yet heroic stand against corporate America, Julia Roberts or John Travolta having their class-action day in court as they denounce Big Pharma etc.

But THE COUNTY’s writer-director Grimur Hakonarson has other, subtler and often more comic ideas. Sure enough, there’s some after-dark damage to Inga’s property: but it’s mainly patio furniture and the neighbouring farmer promises that the culprit, his middle-aged bearded son, will pay for the damage. Inga’s way of dealing with threats from her landlords is to charge into town with her tractor and spray the front of the Co-op and its offices with gallons of her unsellable milk. Eventually, some of the locals are galvanised into lobbying with Inga to set up a new co-operative movement to replace the bloated and corrupt current one: the moment the vote is taken at the meeting of the Farmers’ Association, the camera on Inga’s face throughout, is a model of cinematic tension. A happy ending? Not quite…

Hakonarson and his DP Mart Taniel make full use of the Icelandic climate and landscape at their disposal, dwarfing Inga and her struggles in a way which would satisfy Thomas Hardy. In the background, Hakonarson has assembled a spot-on cast, three-dimensional in their own preoccupations. But above all, from the calf-delivery onwards, there is Egilsdottor whose Inga is dogged and determined and frankly, like Pasolini’s Jesus in THE GOSPEL ACCORDING TO ST. MATTHEW, a bit of a pain in the arse.