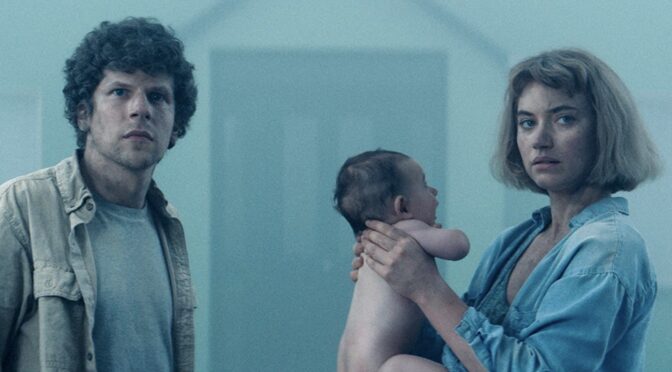 For those worried about disappearing into an anonymous suburban hellscape, VIVARIUM will be the descent into fear and confusion it is intended to be. A single giant metaphor wrapped in more than one enigma and many influences, Lorcan Finnegan’s film is a wonderfully executed pastel-hued nightmare.

The film opens with the disturbing but entirely natural imagery of a large cuckoo chick pushing small flightless host chicks out of the nest. The chicks are found by teacher Gemma (Imogen Poots), connecting this oblique cold open to the main narrative. After knocking off work, she visits a strange estate agent (Jonathan Aris) with her boyfriend Tom (Jesse Eisenberg), whereby the young couple are convinced to visit the estate of homes Martin is hawking. Once there, Martin inexplicably departs, and the couple finds themselves unable to leave, trapped in a labyrinth of identical mint green houses. Amidst increasing desperation, they are delivered a child in a box, with an ominous note that they may leave once raising the child is complete.

As may be guessed from the film’s immediate opening (embellishing the larger metaphor with clarity the film otherwise eschews), the story looks to render the typical path of Western adults not as a benign bore but a nightmarish satire. VIVARIUM has several different – rather large – ideas within its crosshairs, and it mostly succeeds in crafting an engaging and pointed comment on them all.

The most prominent idea is that of parenthood, and primarily motherhood, with the couple growing tired and weak in the efforts to raise the child. The child grows at an unnatural rate and has an uncanny and disturbing ability for mimicry, voicing the repeated proclamations of Gemma and Tom in a warped and disturbing manner (a result of dubbing the child actor’s voice with Jonathan Aris). Although this covers both parents, the most pointed statements and events are reserved for Gemma: a role in which Imogen Poots excels. Her performance is finely tuned for the various stages of resignation and desperation Gemma moves through – from weary frustration to curling into a tight ball against a washing machine to drown out the child’s creepy play.

Many artistic and cinematic references can be cited for VIVARIUM. The overall atmosphere has a bit of a David Lynch feel to it, but the exterior shots evoke THE EXORCIST (indeed, the same painting of René Magritte’s – The Empire of Light – inspired visuals in both films). The use of green is notable throughout; a washed-out pastel that gives a sheen over the characters reminiscent of the sickly pallor of Roy Andersson’s subjects in SONGS FROM THE SECOND FLOOR and YOU, THE LIVING.

The film is likely to take on renewed meanings and interpretations, finding itself released, after a long festival run, amid a near-global lockdown. The futile gardening project Tom undertakes, their food lacking taste, and Gemma’s increasingly conflicted and hopeless feelings will take on a prominent role within the film because of the developing historical context. However, the fact the film’s lead theme can shift with that perhaps speaks to the rounded, if abstract, ideas that writer Grant Shanley and Finnegan have managed to bake into their frightening narrative.‌

VIVARIUM is available for streaming now and on DVD June 8th.

One thought on “Vivarium”