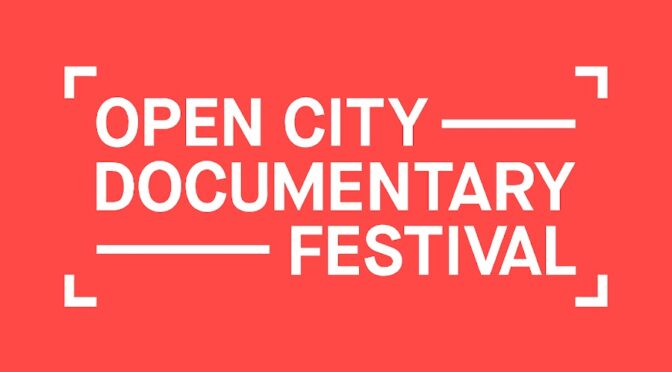 Though the big tent film festivals are the ones that hoover up the most attention, discussion, and coverage, it’s the specialist festivals that harbour the best surprises. Open City Documentary Film Festival, based in London but operating in hybrid form for this year’s edition, focuses on non-fiction works that, by way of their experimental nature, unusual angle of approach, or audacity of form, often don’t receive distribution. Moving image artwork, hybrid films, archival and activist docs, essay films and short-form works: all (and more) are covered by Open City Doc Fest’s remit. And even if this year’s edition doesn’t prove equal to 2020’s programme, featuring both David Osit’s MAYOR and Maya Kosa and Sérgio da Costa’s wonderful BIRD ISLAND, the films still teem with ideas worth interrogating.

Miko Revereza and Carolina Fusilier’s THE STILL SIDE is a film that, at only 70 minutes, outstays its welcome. Set on the fictional Mexican tourist island of Capaluco (based on Acapulco), THE STILL SIDE falters in its attempt to connect the camera’s patient roaming around the “island,” abandoned and left to ruin, and a voiceover concerning a siyokoy, an amphibious humanoid creature from Philippine mythology. In a Q&A following the film, the directors speak of using the siyokoy as a means of thinking about the colonial-era historical connection between Manilla and Acapulco – which is a brilliant idea that never once becomes apparent in the film itself.

Revereza and Fusilier’s approach rewards attention through the small visual and aural effects they catch from closely examining gaudy tourist spots devoid of people: a cafe in a cave; a waterpark bone dry; a zoo and aquarium without animals to populate them. A voice booms from a creaky tannoy, expatiating on the charms of the island, haunting the detritus in the visual field. A close-up sound design and a keen interest in what life does remain (insects and molluscs) resembles in part the work of Harvard’s Sensory Ethnography Lab. And a brilliant moment isolates the shorefront: the waves course through the holes in the concrete, as if the island can breathe now it’s no longer burdened by human habitation.

“Open City Documentary Film Festival, based in London but operating in hybrid form for this year’s edition, focuses on non-fiction works that, by way of their experimental nature, unusual angle of approach, or audacity of form, often don’t receive distribution.”

Highlights among the shorts include Ana Vaz’s 13 WAYS OF LOOKING AT A BLACKBIRD. A collaboration with the director’s students, the film is built out from a reading of Wallace Stevens’s poem of the same name, and Vaz decides to match the poem’s abstractions to her own (‘The mood / Traced in the shadow / An indecipherable cause.’). Stevens, in his Adagia, writes that ‘The real is only the base. But it is the base.’ Vaz, in one instance, seems to be thinking through the appearance of the world before her in similar terms, encountering a treeline that blurs through her lens, questioning the connection between the observer and what is observed. The tension of the tenses at work in the poem (‘It was evening all afternoon. / It was snowing / And it was going to snow.’) are recreated in Vaz’s approach; the thirteen sections – one for each stanza – seem simultaneous, like instances happening in glancing relation to each other.

Readers should always be sceptical of film writers who resort to what the critic James Quandt calls ‘locutions of bafflement.’ Although these often take the form of good-natured acknowledgements of a critic’s inevitable moments of incomprehension, just as often they are used to avoid the hard work of evoking and interpreting the film in question: which is, naturally, the critic’s job. But against my better instincts and Quandt’s admonition, I find myself defeated by Mary Helena Clark’s FIGURE MINUS FACT. The film’s refusal to connect its parts together represents the title accurately: here are scenes, visions, possibilities without referents, without context, without grounding. But these disconnected areas are equally ravishing in their different ways, whether it’s the church bells with which the film opens, the crepuscular blue that pervades, or the night-vision shots of the woods, Clark’s control of tempo, texture, and colour is paramount.

This year’s programme also includes two parts from Alexandra Cuesta’s 16mm series NOTES, IMPRINTS (ON LOVE). The second (‘Carmela’) is the shorter and slighter of the two but is animated by footage of the filmmaker’s grandmother, shown at leisure in her garden. Her soup recipes, gifts of care to her granddaughter, appear as text (and sound delicious). The first in the series is extraordinary: Cuesta’s camera captures her surroundings in run-down Binghamton, New York, often finding still life scenes saturated in Americana. Her eye for compositions imbued with a sense of drama and desolation (the single car in the empty parking lot; looking out to the street from the interior of a diner) is remarkable, and often the images themselves resemble the works of photographers William Eggleston and Saul Leiter, and paintings by Edward Hopper.

Appearing in a photograph, or in a passage of film, can be an act of disclosure, so it’s appropriate then that Cuesta’s work is guarded, and that a notion of privacy is written into its form. Light leakages, those red flashes that engulf celluloid when the print is exposed to light, are used to disguise cuts, often when the director’s husband is captured by her camera. Those glimpses of her personal life are an admission that filmmaking, with its basis in the always potentially exploitative medium of photography, is a constant negotiation between public and private.

“But the best film in this year’s programme is also the funniest. THERE ARE NOT THIRTY-SIX WAYS OF SHOWING A MAN GETTING ON A HORSE, by Nicolás Zukerfeld, is an investigation into film historical hearsay and a fine example of benign cinephilic doggedness.”

But the best film in this year’s programme is also the funniest. THERE ARE NOT THIRTY-SIX WAYS OF SHOWING A MAN GETTING ON A HORSE, by Nicolás Zukerfeld, is an investigation into film historical hearsay and a fine example of benign cinephilic doggedness. Taking its cue from a supposed remark by the Hollywood director Raoul Walsh, Zukerfeld begins by way of a supercut. Clip after clip from Hollywood movies, most of them directed by Walsh, show the title to be incorrect: there are, as it turns out, dozens of ways of showing a person getting on a horse. Some actors opt for the smooth action of placing a foot in the stirrup first and then gracefully swinging over; others decide to lunge first and then find their footing. Then there are the acrobats: frog-leaping from the horse’s rear into the saddle or the truly bizarre but exhilarating manoeuvre of jumping the horse like a hurdle. This section then moves on to clips of characters opening and closing doors, which will be explained retroactively. Before the explanation, the similarities come into view: both mounting and dismounting a horse and entering and exiting a room are acts of arrival and departure; the various ways in which these acts can be filmed denote the director’s approach to filmmaking as a whole.

Watching this section put me in mind of Shigehiko Hasumi’s writing about the gesture in cinema, but it could also prove a manual of sorts, a proclamation of the complexity of the even simplest actions in film, a chance to observe varieties of performance, sound design, camera angle and movement, lighting and colour. But the second and third sections change tact. Zukerfeld then begins what becomes an illustrated lecture. With a rapid pace of delivery, he relates the story of using exactly the quote that gives the film its title in a classroom setting. Something is proving bothersome. So he decides to investigate the source of Walsh’s line, and his enquiry sends him on a hunt across Google searches, magazine archives, email chains with well-connected cinephile friends, and many, many PDFs. The line, which has been mangled in translation, misquoted and repeated, is an example of how film history can be distorted. Zukerfeld’s obsessive avenue of questioning brings him some answers, not before encountering connections to David Bordwell, Kristin Thompson and Janet Staiger’s The Classical Hollywood Cinema, the heyday of Cahiers du Cinéma and a fleeting appearance by film critic par excellence Serge Daney.

If this sounds fussy and pernickety, that’s because it is. Historical work of any kind is exactly that. But Zukerfeld’s charming, at times repetitious, always hilarious lecture shows the proper work of film history, closely attending to the facts and what can be inferred from them, in a spirit of good humour and generosity. But this isn’t one person’s doing. The constant outsourcing, the emails to cinephile friends and strangers, all on the off-chance that the recipient has a particular issue of a particular defunct film publication, and all for the purpose of corroborating this one sentence of Walsh’s, testifies to the massive work of film history, and that it requires many thousands of people to keep knowledge of cinema alive by the same means: questioning, confirming, and not letting the answers slip from grasp.