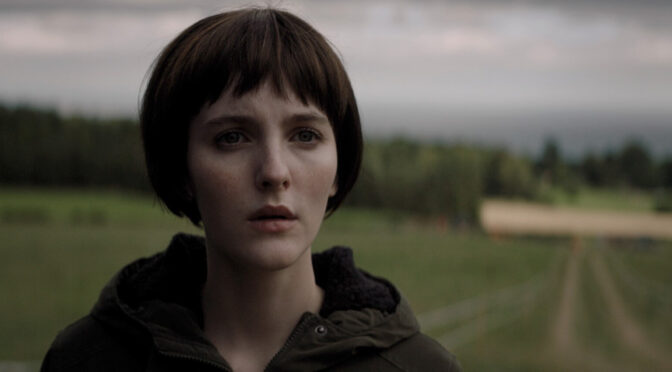 Veterinary student Rose (Ann Skelly) carries a photo of herself with her. It has been ripped in half but taped back together. She’s facing away from the camera, walking along a sea wall. She tells her biological mother, Ellen (Orla Brady), it was taken the day her family told her that she was adopted and that her birth name is Julie. She has persistently reached out to Ellen despite the latter’s wishes for no contact but eventually gets the audience she believes is owed to her. The resulting discoveries are far darker and more traumatic than bargained for – and the path Rose takes towards self-discovery and justice even more so.

ROSE PLAYS JULIE thrives in discomfort. Christine Molloy and Joe Lawlor’s drama opens with a veterinary school lecture on euthanising healthy animals – a common occurrence, often for behavioural reasons – and then spends each following scene contrasting characters’ assumptions and knowledge about their lives and loved ones. While Rose’s education takes second place to her external investigation, the clinical, passionless backdrop proves a cold foil to the protagonist’s inner tumult. Events unfold organically and sensibly but almost always reach the most terrifying – ordinarily, realistically terrifying – conclusion. The ensuing actions feel real and earned, with no detail added for purely shock purposes. An eerie score, with slow discordant strings predominating, imbues each scene with added dread.

Molly and Lawlor’s camera lingers on Skelly’s face, capturing almost imperceptible changes to mouth and eyes as Rose takes on new information and plans her next move. For her part, Skelly masterfully conveys a steely sense of purpose and the doubts that creep in before she takes each new plunge. Her performance hovers between calculations and explosions of raw emotion (and in one small but striking scene, a single leaked tear when supporting a bereaved pet owner). As Ellen, Brady mirrors Skelly’s silent contemplations, capturing a relationship bound by secrets more than blood.

ROSE PLAYS JULIE stumbles slightly in its portrayal of Peter (Aidan Gillen), Rose’s father, Ellen’s assailant, and a celebrity archaeologist. While Gillen’s performance captures the easy confidence and charisma of a charmed life, to an unsettling effect, the film is uncertain whether he represents a monster or a worryingly ordinary (white, affluent) man and what either view says about the horrible mundanity of sexual assault. This tonal inconsistency takes the film dangerously close towards a more salacious and uninteresting place, with the third act losing some of the ambiguity that made the film’s opening so captivating.

That said, ambiguity is not necessarily an essential – or beneficial – addition in a tale of sexual assault’s intergenerational effects, and ROSE PLAYS JULIE remains rooted in its characters and premise to deliver an appropriate, perhaps even satisfying, conclusion.