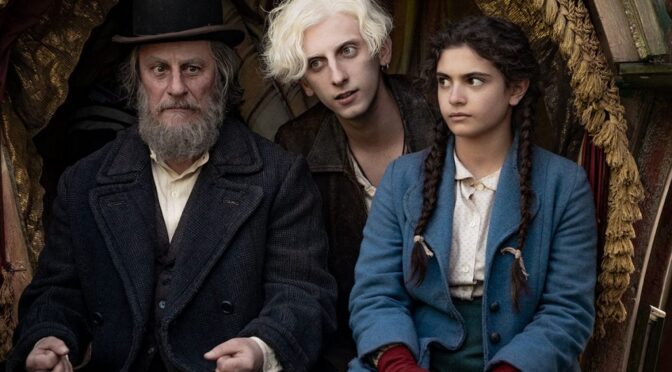 There is never a shortage of World War II-adjacent films, but Gabriele Mainetti’s latest feature gives a sentimental superhero makeover to the well-trodden narrative of infiltrating the Nazis. With nods to the likes of Marvel’s Avengers and X-Men, Mainetti’s four main characters – Matilde, Cencio, Fulvio, and Mario – are performers in a travelling circus. But the magical (CGI-heavy) show that opens the film devolves into an air raid; when their Jewish circus owner, Israel goes in search of safety and disappears, the crew set out to rescue him and end up finding their own refuge before twists of fate and family squabbles see them separated.

Freaks Out somewhat dodges the responsibility to comment on the Nazi atrocities inflicted on disabled people by giving these circus ‘freaks’ supernatural and superhuman powers. Cencio can control all the insects in the world (though he does not much like bees), Fulvio is covered head to toe with hair and is preternaturally strong, Mario is magnetic and metal-manipulating, Israel can conjure living beings from inanimate objects, and Mathilde pulses with an electricity that can power lightbulbs and injure – even kill – anyone who touches her. While these people (especially Fulvio, who is the least adept at hiding) are targets for the Nazis, they are also easily able to dispatch rooms of goons that heavily outnumber them. World War II is a convenient set dressing to rewrite history in the service of a cloying, if entertaining, narrative. The true scale of the Holocaust’s genocidal atrocities are utterly lost.

While Matilde (Aurora Giovinazzo) continues on her rescue mission the longest, all roads eventually lead to the Reich’s favourite Berlin Zircus and its star. Here, Franz Rogowski plays against type as a Nazi performer and clairvoyant, a piano prodigy denied military service due to his six fingers and thus determined to find his own army of ‘freaks’ to win his beloved Fuhrer’s war. Rogowski’s skill in subtlety is entirely lost here, though he is too good an actor to be bogged down by distracting visions of the future (iPhones, PlayStation controllers, videos up to but not past the present day – and of course Hitler’s eventual defeat and suicide).

As the clever villain steals classic rock songs from the future for his dazzled guests, Freaks Out finds brief delight in its own audacity before returning to its somewhat hollow narrative. The film is pulpy and entertaining, but the fact that the narrative could have been set at any time and still have delivered the same impact causes any lasting or memorable qualities to leave a bad taste.