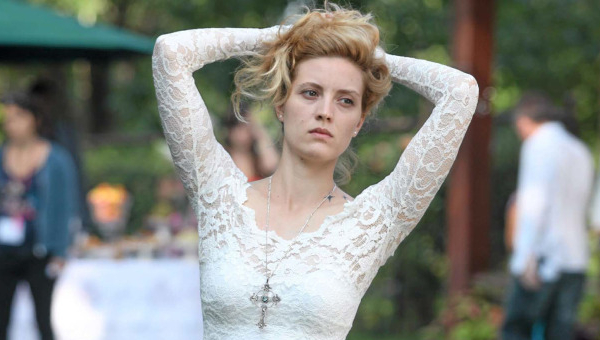 By the time you come to the end of CAFÉ DE FLORE, with its high stylisation levels and incessant soundtrack, the conclusion of the film renders it unlikely you’ll be perched on a fence post. Many viewers will perhaps find it ridiculous and asinine, but if you don’t feel the movie has broken any internal logic and can successfully suspend disbelief, then what you will find is a touching, superbly edited and tremendously acted romantic drama from director Jean-Marc Vallée.

The film makes use of two timelines and a fractured narrative. One tale follows Montreal DJ Antoine (Kevin Parent). Having left his childhood love and mother of his children, Carole (Hélène Florent), he is now living with a beautiful young woman, Rose (Evelyne Brochu) whom he fell in love with two years earlier. Simultaneously, in 1969 Paris, we follow Vanessa Paradis as Jacqueline – a single mother raising a son, Laurent (Marin Gerrier), with Down Syndrome. Once both timelines have been established, Vallée jumps frequently between them – making heavy use of music and cross-cutting to draw parallels between our time-shifted protagonists.

In terms of eliciting emotion and drawing you into the world of his character roster, Vallée has done a fantastic job. At the beginning of the film, the heavily stylised and soundtrack-laden establishing moments may lead you to worry this narrative hop-scotch will grate. However, once the movie has laid the puzzle pieces out in front of you, Valleé feels perfectly comfortable methodically shuffling them around until the whole comes together. Some genuinely heartfelt performances across the whole cast help to keep you engrossed and following the story – given the kinetic editing, especially towards the films conclusion, it would otherwise be easy to stop caring or to lose track.

…once the movie has laid the puzzle pieces out in front of you, Valleé feels perfectly comfortable methodically shuffling them around until the whole comes together.

In some ways, these strengths are also the film’s weaknesses, even though they are arguably minor. Although the editing style is appropriate, and turns out to be extremely effective foreshadowing for the film’s ending, its combination with fractured timelines and narratives can lead to the film appearing slightly indulgent in the same way as (masterful as it is) THE TREE OF LIFE was. With the rapid cutting and heavy emphasis on soundtrack, the characters sometimes get a bit lost during CAFÉ DE FLORE. This is slightly inescapable, given the central role music has in the narrative (the title refers to a 1960s French song beloved by more than one of the characters) and Vallée’s personal musical obsessions, but does deliver some problems. With montage-like sections put to eerie sounds of Sigur Rós or The Dark Side Of The Moon, it sometimes feels like you’re watching a very nicely composed, but perhaps rather clichéd, music video. In this regard, the film works far better on a metaphorical and poetic level than a conventionally narrative one – given the dreamlike quality this ends up lending the film, it harmonises well with the story Vallée wants to tell, even if it might alienate some of the audience.

…if you are willing to try and hold on to the rug that is being pulled from your feet [come the conclusion] then it makes a fitting resolution.

The conclusion of the film will undoubtedly leave audiences divided, but if you are willing to try and hold on to the rug that is being pulled from your feet then it makes a fitting resolution. To a certain extent, films like CAFÉ DE FLORE must be judged on their own terms. If Vallée’s excellent construction and cast draw you in, you’ll quite happily go with the film’s fanciful metaphysical flourishes and head-in-the-clouds tone, and be rewarded with a wonderfully involving tale that tries to capture how emotions and love often seem to transcend the individuals beholden to them.