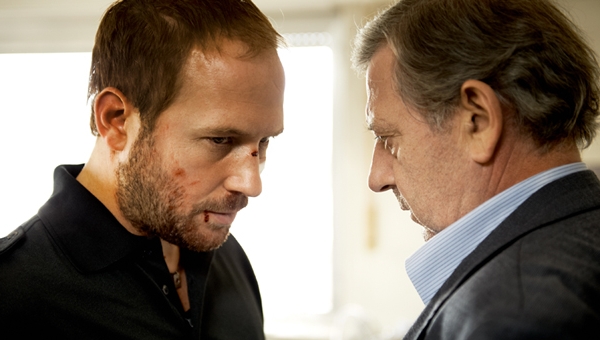 Although the narrative trajectory of DOUDEGE WÉNKEL can’t claim anything innovative, director Christophe Wagner and his co-writers have imbued it with enough ingenuity and character to make an interesting and well crafted thriller. Although the film’s current press centres on the fact the dominant language is Luxembourgish, to focus on this is to ignore some of the more relevant reasons for the film’s reasonably successful final product for a subtitled audience.

The story largely follows Olivier Faber – a police detective suffering with problems in his marriage and barbs from his co-workers on account of suspicion around his sexuality. When his brother, a fellow police officer, is killed one night, the aging Inspector Hastert brings the volatile Olivier in to the case. What starts as a seemingly simple crime grows into a more complicated web of lies and deceit, which threatens the lives of everyone involved.

At first glance the story is well-trodden path. Olivier follows a long line of police thriller characters in the mould of impulsive loose cannon at the side of an older, wiser mentor nearing retirement – think Mills and Somerset of SE7EN, even if there is perhaps less of an odd-couple feel to the pairing in DOUDEGE WÉNKEL. In addition, some of the dialogue feels like it has come out of a million police thrillers from both big and small screen. However, where the script takes its interesting cues is how it chooses to colour in some of these archetypal line sketches.

…where the script takes its interesting cues is how it chooses to colour in some of these archetypal line sketches.

By making Olivier’s problems an external one – the reaction of others to his sexuality – his situation and isolation is afforded a little more room for exploration than if a more hackneyed internal problem like drink, drugs or gambling had been used. Although, frustratingly, it ends up slightly irrelevant to the overall story, there is no doubt this helps to add a small amount of social commentary and lend credibility to Olivier’s closed-off attitude to his peers.

Wagner (who went into this film with largely documentary experience) proves to be a solid performer in the director’s chair. Much like the narrative, there isn’t necessarily a wild amount of invention but certain sequences really stand out and help the film rise above the average. In particular, as the camera tracks behind Olivier – weaving and bending through the aisles of a grocery store – chasing a suspect, the raw and kinetic vérité feel adds a sense of immediacy to proceedings.

In terms of the overall story it would be disingenuous to suggest DOUDEGE WÉNKEL is anything subversive or groundbreaking, but both script and direction are sprinkled with enough interesting parts to allow this solid thriller to engage the audience as it builds towards the strong ending.