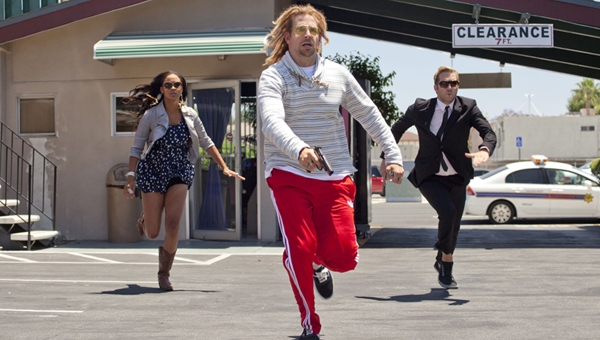 HIT AND RUN is a film that turns out to be more than the sum of its parts, even if it ends up feeling a bit generic and stupid in the action stakes. There is much comedy that is stretched too far, but there is enough inventiveness in the characters and script to keep it ticking along, with an offbeat humour generating plenty of laughs.

The plot begins with Annie, who has been offered a shot at her dream job in Los Angeles, heading up a university department specialising in ‘Non-Violent Conflict Resolution’. The only problem with accepting the offer of an interview is her boyfriend, Charlie Bronson. He is in the witness protection program and cannot go to LA for fear of coming across the perpetrators of the crime he claims to have witnessed. However, after deciding to go with her, the pair set off for LA, not knowing that Annie’s obnoxious ex (with the misplaced intent of protecting her) has found Charlie’s real name and informed those looking for him.

At the beginning the film it seems as if the story will begin as a relationship drama tinged with humour, but as soon as Tom Arnold’s US Marshal blunders in, it soon becomes apparent we’re in for something approaching a farcical action comedy. With the pair of lovers at the centre, finding out more about one another whilst pursued by people with separate agendas, there is more than a hint of TRUE ROMANCE about the project – even down to the xylophone theme and the lead male’s family reconnection. The tone is different, for sure, but the inspiration of the late Tony Scott’s Tarantino-scripted feature is as plain as day.

The film, however, for as much physical humour the hilarious Tom Arnold brings, makes a number of scripting missteps straight out of the 21st century comedy playbook, often relying too much on puerile adolescent humour. On the other hand, however, there are some amusing flip-reverses of the standard comedy-misogyny formula that has plagued some recent films: Annie is a surprisingly assertive character. Although there is an arc of her coming to terms with Charlie’s past, it is he who does most of the running in accommodating her, in comparison to the standard issue bros-before-hos comedies of recent years.

…there are some amusing flip-reverses of the standard comedy-misogyny formula that has plagued some recent films…in comparison to the standard issue bros-before-hos comedies of recent years.

However, the action sequences are largely dull, generic and full of dead ends. They are also so nonsensical that a ham-fisted explanation for how a station wagon can keep up with two-seater sports car needs to be dropped in clumsily, just as the audience begins to scratch their heads. It also falls back lazily on certain jokes (yes, there is a prison rape joke in here, stretched too far) when there is a gap in the script.

HIT AND RUN, for all its faults, however, is still an enjoyable enough action comedy that manages to largely avoid some of the more offensively lazy attitudes and stereotyping that has beset recent American comedies.