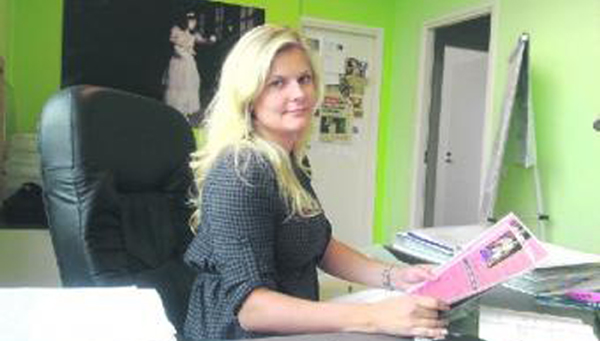 ANOTHER DIMENSION is a short documentary film showing in the VISIONS OF ESTONIA strand. It compares the parallel lives of an old fisherwoman, who sees visions in stones and believes in UFOs, with the otherworldly Sonajalg family, a business orientated Christian four-piece pop band. Producer Mari Kallas spoke to Take One about ANOTHER DIMENSION and about Estonian film in general.

Steve Williams: There is a quote from Estonia in the 1910s that reads, ‘do not let your children go to the cinematograph’ as people thought it had poor health effects. What are your experiences of Estonian attitudes to film?

Mari Kallas: I guess I’m too young to compare the different periods of that history, but generally I think that cinema has changed a lot over the last ten years. Maybe because of that, I am involved right now with filmmaking and that I know how hard a working process it is. Of course there are lots of thoughts about Estonian cinema. We do have a lot of young talented producers and of course directors, but it’s very hard to find good scripts and very good script writers, and you must work hard to find an interesting topic.

We believe in witch doctors, we believe in nature in spirits and this is something that we are.

SW: How did you find these amazing characters, and how did you convince them to be in the film?

MK: As a producer I took a liberty to tell a story that is very close to me. My parents live in the same village in the film, Salme, and i know the locals’ life very well. I have also sensed that there is something going on in this village. The dynasty of the Sonajalg family became famous in Estonia in the 90s after the country got independence. They started out singing as a quartet and they are a religious and very business orientated family. The media followed from the start. We got inspired by their charismatic way of living their life. They are out of this world, especially the twin sisters. Speaking to them you have a feeling that they have a strange connection with another world. They are considered not human in our documentary.

SW: What about the older woman who had given up her job to move to this village. She was very different – how did you convince her to take part?

MK: It was the most difficult part for us to find another side of the story, and we were just visiting couples, families. We were looking for a fisher – we knew that there must be one very old fisher in the village, but not how to find one. It was very difficult. Ellen wasn’t ready in the first place to be part of the story, she wasn’t sure if the world was ready for her message. We had to convince her a lot. But somehow she trusted us and now she is in our story.

SW: Has she seen the film and is she happy?

MK: She is satisfied because she was looking for the answers about what the hell is going on in her backyard. Why the stones, why these signs – and she got the answers right now. We met her a week ago and she was very satisfied. She said that she had new information but that she wouldn’t say what it is.

SW: What do you think the film says about Estonian life at the moment?

MK: I guess the social message is hidden in this film. It portrays Estonian life in its various ways. Right now it’s very difficult for us that we live in different parallels. Because of the social reasons, because of spirits, we do believe in different kinds of things. It’s very common to us. Of course the other side of mystery and paranormal sightings are also very common to our culture. We believe in witch doctors, we believe in nature in spirits and this is something that we are (as a nation).

SW: Do you feel sad about modern life creeping into these Estonian traditions?

MK: Actually from my point of view I feel a little bit sad about it. The family Sonajalg, this (their life) is like a symbol of the American dream. We don’t have helicopters, I don’t know if we need them. We still go fishing, have farming – it’s our business. I feel a little bit sad that we have to move ahead with the times, but it is life.

SW: How much is Estonian national identity still rooted in its history?

MK: We are very stuck to this. It is weird – (in this film) why at the same place why the (archaeological site where some ancient skeletons were found) was discovered why the past wanted to tell us something, why is the present the way it is, why are these people from the future around? It’s for us very symbolic. But it is the life that speaks about us a lot.

MK: It is. We like to hide a lot behind lights. It’s like a mirror. Somebody who looks into it can pick their own message. We like the way that there is some kind of secret power among us.