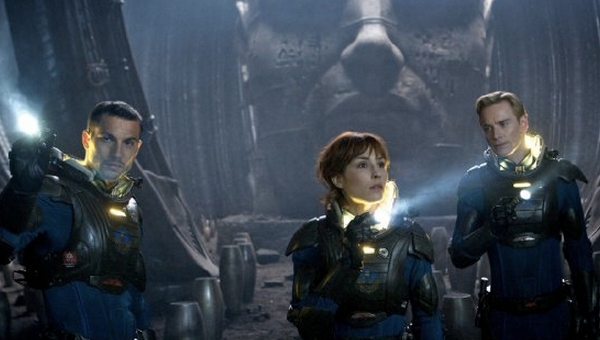 If you could stare into the eyes of your Gods, what would you feel? If you could ask questions of them, would you like the answers? What exactly constitutes a God, if such a thing exists, anyway? These are all questions, amongst many others, that PROMETHEUS attempts to touch upon but doesn’t quite manage to say much new about. Although spectacular and, crucially, worth watching, Ridley Scott’s return to the universe of ALIEN is slightly undone by blockbuster movie logic and a rather shonky, at times appalling, script.

We open in 2089, with archaeologists (and romantic partners) Elizabeth Shaw (Noomi Rapace) and Charlie Holloway (Logan Marshal-Green) discovering a cave painting on the Isle of Skye, and getting very excited and teary-eyed about it. The film quickly fast-forwards to 2094, where a hologramatic version of the uber-rich Peter Weyland (Guy Pearce) indicates he has funded the mission to LV-223. LV-223 is a moon identified in the cave paintings of several civilisations with no contact with one another, and the crew is here to seek an alien race Shaw and Holloway believe may be responsible for human life on Earth. David (Michael Fassbender), an android indistinguishable from humans, has manned the craft whilst the rest of the crew were in stasis. Also onboard is the cold and businesslike Weyland Corp. representative Meredith Vickers (Charlize Theron), ostensibly in charge, and Captain Janek (Idris Elba), amongst a host of others.

Ridley Scott is well-known for being a fantastic creator of worlds [and with PROMETHEUS] he has once again created an excellent visual spectacle.

Ridley Scott is well known for being a fantastic creator of worlds, whether that be a grimy spaceship in ALIEN, dystopian Los Angeles in BLADE RUNNER or the varied landscapes of the Roman empire in GLADIATOR. With PROMETHEUS, he has once again created an excellent visual spectacle. Between opening with sweeping landscape shots across ancient Earth and a stunning sequence on approach to LV-223, the tone and themes are quickly established as being far grander in scope than that of the claustrophobic ALIEN. If this wasn’t clear from the beginning, the orchestral score – sometimes highly evocative of the classic sci-fi films through the ages – should leave you in no doubt.

…but with Damon Lindelof we have a screenwriter who is not capable of communicating [the] ideas effectively.

This isn’t an issue, as some of best sci-fi films (including Scott’s own BLADE RUNNER) have come from pondering questions about the human condition and our own existence, but with Damon Lindelof we have a screenwriter who is not capable of communicating these Chariots of the Gods? ideas effectively. Although there is great deal of debate surrounding Creationism versus Darwinism and the origins of life, the main characters in PROMETHEUS talk as if they are sitting around having a chat at the local university’s Metaphysics Society. Lindelof’s characters don’t talk like archaeologists, geologists, pilots or biologists – they talk like Philosophy and Theology students.

Scott isn’t blameless and, almost unforgivably, PROMETHEUS also occasionally falls prey to the worst types of blockbuster logic and plotting – the same sort of decision making process that the characters in BATTLESHIP and TRANSFORMERS go through. A prestige director does not grant immunity from such flaws. Revelations and set pieces arrive without warning and pass without consequence. Characters motivations follow the requirements of the script, rather than the opposite. The progression of the film relies on characters subverting their motivations from five minutes earlier and doing some things beyond the limits of credible human stupidity (or, to try and remain firmly within the film’s internal logic, outwith the professionalism of a crew supposedly hand picked by a corporation with delusions of grandeur).

Having said all this, the good things about PROMETHEUS are numerous and keep the film well worth watching.

Having said all this, the good things about PROMETHEUS are numerous and keep the film well worth watching. Besides the visuals, the performances of Rapace and Fassbender are superb – for Rapace this is primarily as a result of the greater characterisation, which she takes full advantage of. As a crew member with faith in a higher power, it is her character arc which is the heart of the film’s bigger concerns. She delivers an excellent performance filled with a desperate longing for answers, while also retaining the determination and presence readily evident in THE GIRL WITH THE DRAGON TATTOO. Fassbender almost steals the film, and is an actor quickly becoming one of the finest of his generation. Everything about his performance embodies his character – the voice, the economy of movement and even the sinister anti-Asimovian undertones of his character.

On an action and horror level, there are moments to get the heart pounding in PROMETHEUS, and as long as you don’t compare the film to ALIEN too hard you’re unlikely to be disappointed by the thrills and ideas it delivers. PROMETHEUS is a film about concepts and questions, and although these aren’t new and it doesn’t fully deliver in its examination of them, marrying this with the horror sensibilties of ALIEN and the Giger biomechanical visual aesthetic creates an engrossing movie. Although a heavily flawed piece of work, hamstrung by the muddled and often lazy script, PROMETHEUS is an undeniably compelling film that should be watched on a screen the size of a spaceship. Flawed? Yes. Will you care while you’re watching? Probably not.