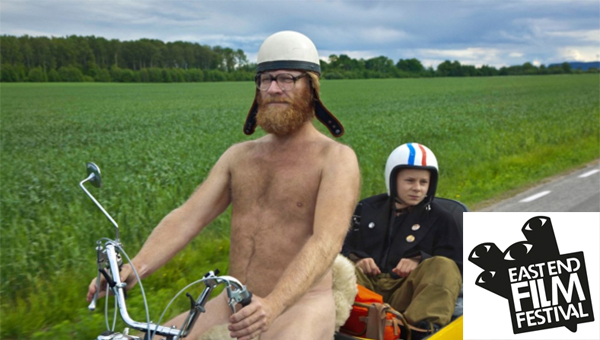 Having extolled the virtues of British butter and country living, John Lydon has found time to champion a Norwegian film, labelling it as the ‘true story of punk’ seen through the eyes of a troubled youth. SONS OF NORWAY offers a delicious take on teenage rebellion, with Lydon making a cameo appearance, but nary a crumpet in sight.

Family life in 1978, in the satellite town of Rykkinn, north of Oslo, is nothing if not unorthodox for 13 year old Nikolaj (Åsmund Høeg) and his younger brother. His free-spirited parents, hippie architect father Magnus (the wonderful Sven Nordin) and mother Lone (Sonja Richter) serve up a banana themed Christmas for the family, and when Nikolai interrupts his father mid-coitus, he is invited to hang around and observe what Magnus considers to be a great lay. The family idyll is shattered after a tragic accident involving Lone, leading to a breakdown for the distraught Magnus, while Nikolaj fills his emotional void with punk music and a little social disorder. But rebellion is not so easy when your father approves of your use of safety pins on your face and wants to play drums in your punk band.

Thankfully, the film is notable for more than its punk rock credentials …

Director Jens Lien and screenwriter Nikolaj Frobenius – adapting his own semi-autobiographical novel Theory and Practice – spent two rain soaked hours outside a Public Image Ltd reunion concert at Brixton Academy to convince John Lydon about their script they wanted to film. Their perseverance paid off as without the godfather of punk’s involvement SONS OF NORWAY would have perhaps lost some of its anarchic spirit, and no doubt much of its Sex Pistols soundtrack. Thankfully, the film is notable for more than its punk rock credentials and is at heart a warmly humorous portrait of a father and son who refuse to live by the accepted norms of life.

Lien perfectly captures the outwardly drab and slightly surreal late 70s setting, the uniformity of its architecture at odds with the absurdities of family life for Nikolaj. The film is at its strongest when it conveys the embarrassment that Nikolaj frequently faces from an unconventional father whose idea of a road trip with his son involves a visit to a Swedish nudist camp. As Magnus views his son’s rebellion as something to be encouraged, the central conflict between father and son becomes superfluous, losing some dramatic momentum as a result. Despite this, the film is centred on the excellent pairing of the two leads. Åsmund Høeg does exceptionally well, in a performance that relies little on dialogue, to convey a broad range of emotions while Sven Nordin is selfless as the radical father who is a punk in the true sense of the word.

At the film’s conclusion, Lydon appears to Nikolaj in a dream, offering his definitive take on life and the universe as being little more than excrement. SONS OF NORWAY sticks two fingers up at that maxim.