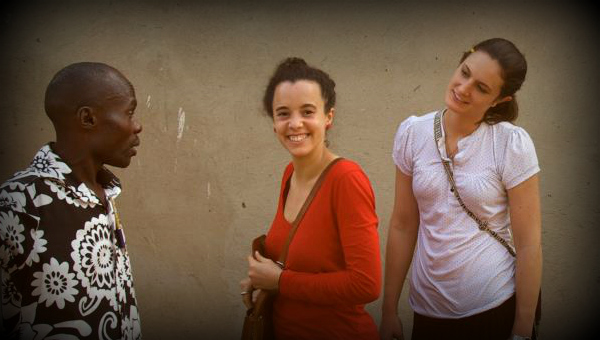 If you take Western European views on homosexuality for granted and don’t think much about the issue, you should watch CALL ME KUCHU.

In 2009 a bill was submitted to the Ugandan parliament criminalising homosexual acts, upon pain of death in some cases. Church groups supported by US evangelists and tabloid newspapers barged into the debate supporting the bill wholeheartedly. Some even ran hate campaigns publishing photographs of ‘known’ homosexuals or ‘kuchus’ demanding that they be hanged.

Yet activists in the lesbian, gay, bisexual and transgender (LGBT) community in Uganda challenged this bigotry and defended their human rights. Sadly one leading activist, David Kato – reportedly Uganda’s first openly gay man – was murdered in early 2011, just weeks after winning a court case in the ongoing legal tussles. At the time, filmmakers  Katherine Fairfax Wright and Malika Zouhali-Worrall were shooting a documentary about the LGBT activist movement in the country, including Kato’s role in it.

David Perilli: What was the original structure of CALL ME KUCHU?

Malika Zouhali-Worrall: Originally, our goal was to follow the activist movement. We were attracted to Uganda because we’d heard about the transgender activist called Victor Mukasa who sued the Ugandan attorney general for police harassment. We were very aware that Uganda is a very homophobic country with these awful sodomy laws. We were intrigued by these LGBT activists who were courageous enough to sue, and that there was a court system and judiciary independent enough to enforce the constitution. Initially, we wanted to follow them in their fight and document the incredible work they were doing. But when David Kato was killed, he’d already clearly become the main character in our film. We felt this huge responsibility because we realised we had documented the last year in his life.

DP: Naome, how did you react when you met these filmmakers who wanted to document what you were doing?

Naome Ruzindana: I didn’t know them. I didn’t even know where they were coming from. But because David was a close friend, we kept sharing. So he also shared with me when the directors were in the country. He was doing his interview and he called me to just be in the film. So when I met them, they were friendly. That’s how we started connecting.

DP: Unlike some European films, the anti-gay figureheads in CALL ME KUCHU seemed very willing to talk. Did this surprise you?

MZW: Part of the reason why the government didn’t mind us being there was because we weren’t making a film about a sensitive topic. We were making a film about something that they very openly, publicly stated that they believed in. They were very open about their homophobia. They wanted to tell us all about it. They weren’t aggressive at all. They just very strongly believed that we were wrong and they were right. They saw it as their mission to educate us on this or tell us what their opinion was.

DP: There don’t seem to be many people in the middle, between the two factions, stating their views. Was that deliberate?

MZW: From our point of view I think one area where it’s harder to get people to talk is the moderates. For example, Bishop Senyonjo [a former Anglican Church of Uganda bishop sympathetic to the LGBT community] knows a few clergymen, even bishops, who don’t personally have an issue with gay people. They don’t want homosexuality to be criminalised but they’re not quite willing to say that publicly and insert themselves into a political storm. The film wasn’t about them. Even among the LGBT community in order to film in detail they had to be out. Pretty much by definition anyone who we were able to film with was someone who wanted to have the opportunity to tell their own story for once rather than having these tabloid newspapers telling it.

Katherine Fairfax Wright: People either abstain or they have a really strong opinion. It’s funny because now that I think about it I can’t even remember that many conversations with people that were like ‘gay people are okay’. It was either they have a big problem with them or they’re very okay with them.

DP: Did you feel intimidated covering these events?

MZW: Both Katherine and I were a little concerned about our first trip and how we would be treated by the Ugandan government. We had no idea whether we’d have our hard drives confiscated and so on. We realised pretty quickly that Uganda has a pretty strong sense of freedom of the press. This also kind of relates to a larger understanding that we developed, which we hope comes through in the film. Uganda has some really robust democratic elements in its society.

KFW: The only time I felt intimidated was the day we weren’t allowed to film, at one of Pastor Ssempa’s services. That was probably one of the craziest events I’ve ever witnessed. It was like a hate rally. It was six hours long and so full of misinformation and hatred towards the LGBT community. I just wanted to melt in my seat. It was mixed in with this beautiful happy song and dance, and hundreds of parishioners so happy to be at church on Sundays. Part of you is like – wow – this is the great side of religion. It’s so wonderful. There’s such a community for all these people and kids are running around and everyone’s so happy. And then Pastor Ssempa starts spouting all this stuff, bringing out ‘recovered’ gay people, and having them tell their story about how their houses are ridden with drugs and that they buy toys for little children to convince them.

DP: How did you react to David Kato’s murder?

NR: When I got the news I didn’t react. It took a long time to enter into my brain. I didn’t believe it was true. Then it was confirmed. When we visited his home, that’s when I believed he was dead because I saw the blood. I saw this African thing of putting out the fire when a person is dead. Then I got so broken down, it really affected me too much. We felt like the struggle was stopping there and then. We really took time to think of a way forward after that.

MZW: We were in New York at the time. We had to kick into autopilot and just try and figure the crazy logistics of trying to get Katy onto a flight so that she could be there in time for the funeral. It meant that dealing with it emotionally was kind of deferred. It meant that our mourning or emotional process all happened much later.

“Hopefully this shows a bit of [David’s] charisma and his intelligence, his wit and humour, and rudeness and spark…”

DP: Looking back at the David Kato you all knew, do you think the media image of him has changed since his death?

NR: No. To me it’s the David that I know. To me, us activists, we know it’s the same David that is in the film. But to other people then it is showing how great he was.

KFW: I think from what we’ve heard it shows him as a more complex human being than simply the martyr he’s been made out to be or the victim he’s been made out to be the international press. Hopefully this shows a bit of his charisma and his intelligence, his wit and humour, and rudeness and spark, and all of the wonderful things we loved about him. I think that is also what’s going to be most convincing to an audience. If you’re trying to convince someone that someone’s human rights are legitimate then what better way to prove it than just show them being the human being that they are.

DP: Lastly, where has CALL ME KUCHU been shown in Africa?

MZW: We screened it in Uganda with the activist community to launch the first ever Gay Pride which was awesome. It’s also screened in Nigeria, in Lagos, at a film festival there. It’s screened a lot in South Africa in Durban and Jo’burg and Cape Town. I think it’s going to screen shortly in Ethiopia. It’s either about to or has just screened in Kenya with Human Rights Watch. And hopefully it will be screening with a film festival next year in Kampala.

Read our review of CALL ME KUCHU here.