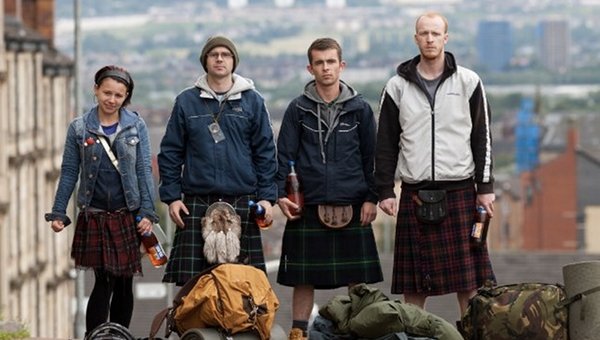 Ken Loach is known as a master of downbeat social drama, but every so often that approach is tempered just a little. THE ANGELS’ SHARE is an engaging and light-hearted comedy, but retains echoes of the Loach stereotype. Although undeniably enjoyable, some odd contrasts in tone, easy plotting and a mix of both more genuine and shortbread-tin versions of the Scots mean it isn’t quite up with his and screenwriter Paul Laverty’s best work.

The film centres on Robbie – a young Glaswegian who narrowly avoids a jail sentence following a fight with a number of folk who hold a longstanding grudge against him. Soon to become a father, Robbie discovers he has a rare nose for whisky and seeks to learn more about it. Banding together with some friends from his community service group, this leads to a caper that will help him set up his family’s future and out of his desperate social situation.

Although the superficial touchstone for THE ANGELS’ SHARE is Alexander Mackendrick’s WHISKY GALORE!, Loach’s film bears a significant resemblance to the debut of Bill Forsyth – THAT SINKING FEELING (even if the man himself is unaware of the parallel). Similarly, that 1980 effort centred on a group of young Glaswegians looking to improve their situations through a vaguely comedic crime caper, in their case the theft of stainless steel sinks. The performances of the cast are all endearing, putting across some of the typically Scottish and Glaswegian humour Laverty has woven in well, and most of it hits the mark without being too broad. The earlier, more violent, strand of the film is a genuinely engaging drama, with a fine performance from first-timer Paul Brannigan (ably backed up by John Henshaw as Harry, the group’s community service leader, who introduces Robbie to whisky).

The performances of the cast are all endearing, […] and most of [the comedy] hits the mark without being too broad.

This isn’t to say THE ANGELS’ SHARE is a home run, however. As the film develops into more of a caper comedy – think OCEAN’S ELEVEN with kilts and Irn-Bru instead of suits and cocktails – the earlier section feels like a rather distant cousin, oddly tacked on at the front and preceding a lurching shift in tone. The join in the middle, where Robbie ‘develops’ his whisky nose, is laughably quickly dealt with even if the way he goes about it is humorous (with a hint of a rather depressing aptness about how the opportunity arises). The same section also contains a one or two odd gross-out humour moments which seemed more at home in JACKASS: THE MOVIE, and after this point the problems and difficult past of Robbie (set up so well, not least in an extremely affecting victim confrontation scene) are discarded all too easily.

…but could we not have had something less obvious [than ‘500 Miles’] as ‘road’ music? Even SHREK had enough originality to plump for a different song by The Proclaimers…

A couple of peripheral parts perhaps needed more imagination. Being Scottish, I’ve bellowed out The Proclaimers’ ‘I’m Gonna Be (500 Miles)’, almost an unofficial national anthem, with the best of them – but could we not have had something less obvious as ‘road’ music? Even SHREK (featuring another butchering of the accent by Mike Myers) had enough originality to plump for a different song by The Proclaimers (‘I’m On My Way’). Having said that, even if the first act presents the more unsavoury side of Scottish stereotyping, it is refreshing to have those aspects portrayed in a more realistic and compassionate fashion – the characters in the film clearly matter to Loach and Laverty.

THE ANGELS’ SHARE is rather like a good single malt with a huge block of ice in it. To me, they are an odd match and the more valuable part ends up irrevocably diluted, but everything you’ll enjoy is still there. Even if this perhaps ruins it for the more picky connoisseur, you can’t deny it goes down easily. Slàinte.