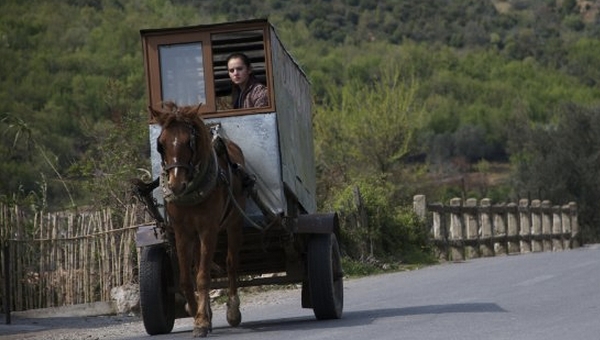 Joshua Marston’s second feature, THE FORGIVENESS OF BLOOD, is a quietly dramatic and involving story anchored by some terrific acting from the young leads, Tristan Halilaj and Sindi Lacej. Although it loses some narrative momentum towards the end, the film as a whole places us right in the middle of a family drama anchored between youth and ancient tradition.

Mark (Refet Abazi) supports his family in Albania selling bread from a rickety horse-and-cart arrangement, often using a road that crosses the land of Sokol (Veton Osmani) to shorten the route and make his daily rounds possible (with the land formerly in the ownership of Mark and family, he views this as a right). One day, however, following a disagreement between the two, Sokol blocks off the route entirely. With his family’s livelihood at stake, Mark and his brother confront Sokol – who ends up dead. The Kanun, a set of traditional Albanian laws, dictates that Mark’s family owes a blood debt to Sokol’s. With his brother in jail and him on the run, however, it is Mark’s family that are in danger of being killed should they venture outside the house. Primarily, that target is the eldest son Nik (Tristan Halilaj). Confined to the house, Nik’s frustrations at his life being put on indefinite hold until the dispute is resolved grow – unable to go outside, see his friends, his girlfriend or anything else.

The focus of the film is very much on the strain that these ancient blood feuds – initiated and perpetuated by an older generation – have on the youth of the community. Caught in the mire is Nik’s sister Rudina (Sindi Lacej) – although publicity shots focus on Nik, Rudina is as much of a lead character as him. It is her that must sell bread and sustain the family in her father’s absence as she is less likely to be targeted than her brother. A diligent and bright school student, her promising intellect is pushed aside as a result of the blood feud.

The focus of the film is very much on the strain that these ancient blood feuds – initiated and perpetuated by an older generation – have on the youth of the community.

The youngest siblings grow bored and weary as they are cooped up with home schooling and Nik gradually grows more frustrated at his house-arrest that comes through no fault of his own. As the attempts to end the feud grow increasingly futile and circular, Haililaj conveys the cabin fever eating at Nik effectively and without any histrionics. It is also greatly to the credit of the script (which won a Silver Bear at Berlinale 2011), that we come to understand much of the operation of these laws without tiresomely obvious exposition.

This appears to be no clichéd portrait of Albania, with Marston very much juxtaposing the modern phone-toting youngsters primarily affected with the old, wrinkled elders sitting around drinking tea while their descendants slowly lose the joy of youth. Much like his debut feature, MARIA FULL OF GRACE, there is the feeling that we have been dropped into this world rather than having a plot contrived around it.

Much like [Marston’s] debut feature, MARIA FULL OF GRACE, there is the feeling that we have been dropped into this world rather than having a plot contrived around it.

If there is anything the film perhaps doesn’t do as well, then the result of the house-arrest scenario is that the film becomes, for some stretches, something of a chamber piece. However, even if this is to convey the lack of freedom this imposes upon Nik, Marston doesn’t employ enough visual flair to sustain the narrative as well during these periods and a number of scenes feel unnecessarily repetitive. Given the inspiration his shooting approach takes from that of Mike Leigh and Ken Loach, this perhaps isn’t surprising (this is a criticism sometimes levelled at the British film makers), but it does result in a loss of narrative momentum around the middle. As the film builds to its understated but resonant climax, this is fortunately retrieved to a certain extent.

Having said this, THE FORGIVENESS OF BLOOD is an engrossing tale that refreshingly avoids cultural clichés, focusing on the suppression of youth and the how tradition can hold back the progress of the next generation. With an excellent ensemble of acting performances, the film draws you in fantastically to this emotional and character-driven story.