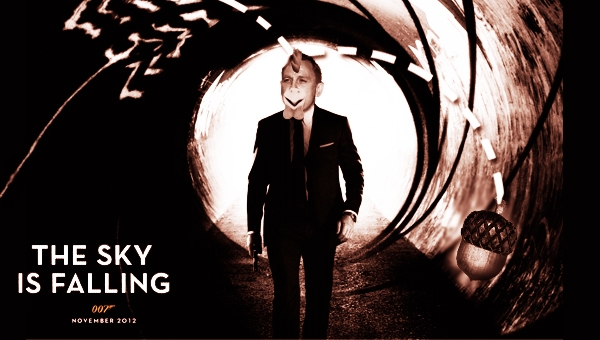 SKYFALL has swept all before it in the past fortnight. Not even The Hulk or Batman himself could withstand Bond’s charm and old-school bravado in the yearly box-office charts. In the words of our own Liam Jack, it kept “the complex, serious tone set by the last two films, but subtly [intertwined] the rest of the franchise’s DNA”. As good as it was – an excellent combination of post-Bourne muscle and the old Connery-style swagger – in terms of the Bond films as a whole, does it represent an unwillingness to let the character and films evolve? What do we even want from James Bond these days?

“… having dealt with a suave, callous knob for the majority of the Roger Moore era, Craig’s Bond had a hint of self-loathing.”

CASINO ROYALE was a film of its time. Batman had just been successfully stabilised by Chris Nolan. It was time to grab the controls and find the same stability for a series which had been sent into a self-parodic tailspin by the dreadful DIE ANOTHER DAY. We were delivered a Bond for the 21st century and the post-Bourne era. Jason Bourne with a shot of class and a measure of Connery – hold the existential angst, please. That said, in comparison to the suave, callous knob of the Roger Moore era, Craig’s Bond had a hint of self-loathing. Martin Campbell (who also directed the best Brosnan entry, GOLDENEYE) took us back to basics with a Bond who was more like a long-lost brother of the familiar, shaken-not-stirred character. SKYFALL, though, seemingly pandering to 007’s 50th anniversary on film, jettisons that. The Bond of SKYFALL is not the Bond of CASINO ROYALE or the now oft-maligned QUANTUM OF SOLACE.

The raw impact of seeing Bond emotionally crushed at the end of CASINO ROYALE – and stripped of the pastiche that had been like a millstone around the character’s neck – is powerful. As Craig punches out the line, “The job is done, and the bitch is dead”, you can feel the emotional shutters coming down and palpably sense the callous detachment that occasionally seeped into previous portrayals. Bond lays himself bare in QUANTUM OF SOLACE, but then SKYFALL sees him casually regress into an earlier world of lair-bound villains, DB5s, ejector seats and yet more casinos. By the end of the film, it feels as though someone has hit the button marked ‘Return to factory settings’ (further, the only female field agent decides she really wants to be M’s desk-jockey – really?).

“…if anything, SKYFALL is more interesting when considered from M’s standpoint.”

SKYFALL has received rhapsodic praise, which begs the question: did we ever really want this modern and emotionally vulnerable Bond? The figure has been hinted at before, with George Lazenby in ON HER MAJESTY’S SECRET SERVICE. The death of Bond’s wife, which left behind a suitably crushed 007, bucked a formula that had become entrenched. However, the series soon resumed normal service with the worst of Connery’s outings, DIAMONDS ARE FOREVER. SKYFALL has been so well received because it is a film made for Bond fans who stuck with films like DIAMONDS. The self-knowing winks in SKYFALL are frequent. Bond and the double-0 section is referred to as a relic of the Cold War, something that was also true of the series itself and its anachronistic central figure in the aftermath of the USSR’s collapse. Although SKYFALL is a greatly enjoyable film, it says nothing new and does nothing interesting with the Bond character (if anything, SKYFALL is more interesting when considered from M’s standpoint). But then, whenever the series has tried to say something new, it has been viewed as limp and overly serious.

Many comparisons have been made between SKYFALL and THE DARK KNIGHT, but this ignores the fact that Nolan’s film is built on BATMAN BEGINS without jettisoning anything from the reimagined character, unlike the trajectory taken by Bond since CASINO ROYALE. A version of THE DARK KNIGHT in the SKYFALL vein would be riddled with gimmicks such as the convertible Batmobile or shark-repellent Batspray from the 1960s TV show. SKYFALL’s Bond is not a man of the 21st Century. He drives a DB5. He flirts smarmily with secretaries. He schmoozes around exotic casinos. He shags people in the shower. Bond is back to being presented as a virile superhero, with all the associated tropes thinly veiled.

“…continuity is, of course, hard in a property that was ‘rebooting’ itself long before the phrase was even invented…”

The interesting aspect is where the films go with Bond 24. As good as SKYFALL is, much of that is down to the fact that it is also one of the most technically well-made Bond films ever, thanks to the contributions of Sam Mendes and Roger Deakins. Besides the technical aspect, it is only the Oedipal overtones of the M/Bond/Silva triangle which are new. Smart flip-reverses such as the new dynamic between Q and 007, as pointed out in reviews, rely on the Bond of old. If the character takes the path laid out at the conclusion, it won’t be long before the series finds itself down another DIE ANOTHER DAY style cul-de-sac. The blueprint is enjoyable, for now, but totally unsustainable.

Although continuity is, of course, hard in a property that was ‘rebooting’ itself long before the phrase was even invented, let alone appropriated by cinema, the Bond films are in danger of slipping into nostalgia when, off the back of CASINO ROYALE, it should be forging a new and exciting path. In an age of grimly topical spy thrillers, this is perhaps what the fans want, but if Bond is to live on, he may need yet another reinvention sooner rather than later.

4 thoughts on “The Unbreakable Bond”