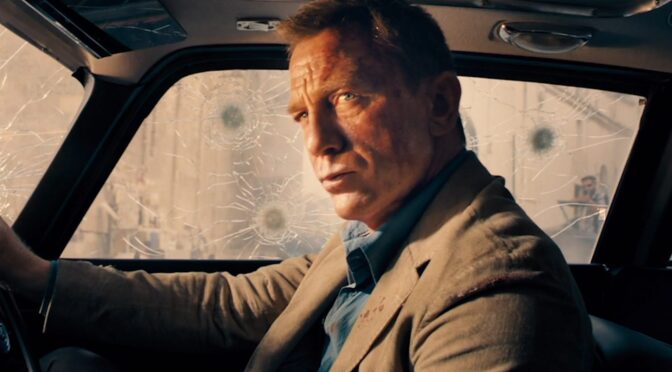 NO TIME TO DIE, with its ambition to tie together the Daniel Craig era, would rather – as Jack London may have put it – “burn out in a brilliant blaze than it should be stifled by dry-rot”. Even if SPECTRE was a signal of the latter, Cary Joji Fukunaga’s sequel mostly succeeds in burning brightly. NO TIME TO DIE is a viscerally effective send-off for Daniel Craig’s tenure. Still, a deep thematic confusion prevents it from resonating beyond the increasingly narrow confines of what a James Bond movie is seemingly allowed to be.

As the film opens, we are introduced to Lyutsifer Safin (Rami Malek) – the main villain of this instalment – in flashback. He seeks vengeance for the death of his family, perpetrated by the erstwhile Mr White, and terrorises White’s daughter, a young Madeleine Swann. Many years later, the adult Madeleine (Lea Seydoux, reprising her SPECTRE role) travels in romantic bliss with Bond until global events involving Blofeld’s (Christoph Waltz) S.P.E.C.T.R.E. organisation, Safin, and the dangerous weapon ‘Project Heracles’ intrude.

To outline the plot in further detail would be futile, as the fundamental mechanics play out in a somewhat Bond-by-numbers manner: villains (sadly still with facial scarring as signifiers), global domination, going rogue, races against time, the usual. Having said this, the set pieces and action have developed a modern and evocative edge. The somewhat weightless spectacles of the late Brosnan era now feel like the stone age compared to the brutal beatings Craig’s Bond both receives and metes out. At the same time, Fukunaga achieves a level of gloss here, combined with some flashy sound design, that shows the last few entries have evolved from the Bourne-inspired kineticism of Casino Royale’s fistfights into their own graceful beasts.

“However, for all this beauty and technical skill, the script of NO TIME TO DIE remains as confused as its two immediate predecessors about what James Bond should mean as a character.”

Although the ubiquity of Hans Zimmer’s musical scores on the blockbuster scene is undoubtedly tiresome to some, he once again manages to blend his modern, slightly industrial orchestral work with an iconic sound. Similar to the achievements in the likes of MAN OF STEEL, THE LONE RANGER, and his BATMAN BEGINS collaboration with James Newton Howard, it is almost as if the nostalgic expectations of the music keep Zimmer from indulging in the worst of his most recent excesses. The reverberating ‘bongs’ (wildly overused since INCEPTION) are, mercifully, at a minimum. Further, the presence of Billie Eilish’s title track in different forms, harking back to its lyrics and mood at notable moments, is a nice touch that adds some depth to the film’s musical palette.

Linus Sandgren’s cinematography, one of the most effective aspects of the impact of Damien Chazelle’s FIRST MAN, is just as impressive here as Hoyte van Hoytema’s was in SPECTRE. The look of the films has made a noticeable jump in quality after Roger Deakins’s involvement in SKYFALL and has enormously extended what the Bond series has had to offer.

However, for all this beauty and technical skill, the script of NO TIME TO DIE remains as confused as its two immediate predecessors about what James Bond should mean as a character. As Craig’s last outing as Bond – and the final film in a series which has (attempted, at least) a multi-film arc – NO TIME TO DIE is understandably concerned with the notion of legacy and personal commitment. The stakes, whilst retaining the global-scale threat Bond films seemingly demand (Mads Mikkelsen’s compelling but glorified accountant in CASINO ROYALE seems a long way from Malek’s mugging here), look to retain a personal angle. Emotional motivation for Bond, which spans multiple films, has been hinted at before Craig’s era, notably ON HER MAJESTY’S SECRET SERVICE (a film whose essence permeates this entry), but never meaningfully committed to.

“Malek’s Safin is an identikit Bond villain with no connection to this personal struggle or Bond’s previous strife, and a tenuous one to the ideas of legacy and spiritual reach. The threat he offers is purely logistical when the film demands an emotional or even metaphysical one.”

However, the film’s choice of primary villain, as well as a sidelined presence for other established characters, removes some of the coherence from an otherwise compelling and fresh thematic underpinning. In this regard, the challenge facing Bond is thematically meaningless. Malek’s Safin is an identikit Bond villain with no connection to this personal struggle or Bond’s previous strife, and a tenuous one to the ideas of legacy and spiritual reach. The threat he offers is purely logistical when the film demands an emotional or even metaphysical one. Further, Lashana Lynch’s ‘replacement’ 007, Nomi, also hinted at an opportunity to examine the notion of this Bond’s legacy, with pointed early scenes nodding toward ‘out with the old and in with the new’. Instead, as with the entirety of the series from SKYFALL onward, this relationship retreats into deference to the Bond character’s traditional iconography.

This confused set of character dynamics and plot choices are, as with SKYFALL, hamstrung by learning the wrong lessons from previous instalments and a lack of conviction in its bolder choices. Maybe this speaks to the film’s pre-COVID production troubles from the jettisoned Danny Boyle/John Hodge collaboration this film once was, or perhaps the more muted critical response to SPECTRE. Either way, the character and story decisions in the final film rob its emotional angles of the deeper resonance for which it clearly strives.

Early on, Bond pointedly declares that “the past is not dead”, but NO TIME TO DIE is fundamentally unsure what, in grander terms, he means by that. Is it the responsibility for the lasting impact of one’s deeds? Or is it a heavy weight that can never be shaken off? Instead, the more emblematic quote comes from Ralph Fiennes’s M, who angrily spits at Bond that “if you’ve nothing left to give, then you’re irrelevant”. The technical artistry, and Craig’s central performances since 2006, show the series can still have plenty to offer. However, comparing this final entry to CASINO ROYALE, the retrograde vision embraced since then makes it hard to see how it can stave off that insignificance forever.