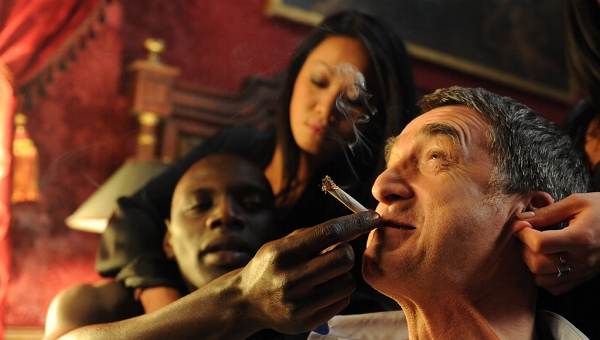 UNTOUCHABLE has become something of a phenomenon – making a huge splash on the continent and doing decent business elsewhere off the back of that. As amiable as it can be, however, it’s rather hard to ignore the cliche and stereotype-ridden story, despite an engaging pair of lead performances.

François Cluzet is Philippe – a quadriplegic who goes through carers like hot suppers due to the difficulty of looking after him. A wealthy man paralysed in a paragliding accident, he hires the young Driss (Omar Sy) in an attempt to inject some vibrancy into his life. Driss is a poor young man, initially there to simply get a signature for his benefit paperwork, but after being hired by Philippe the two begin to strike up a bond.

It would be churlish to deny that the lead pair do a decent job, Omar Sy being particularly endearing as the vibrant, but initially misguided, Driss. In addition, Cluzet bounces off Sy very well, but beyond that there is little of note besides a handful of good laugh-out-loud moments.

“The script is peppered with dreadful cliches and a number of comic missteps.”

The script is peppered with dreadful cliches and a number of comic missteps. A scene where Driss dances to contemporary music as a counterpoint to Philippe’s classical is toe-curling. At once we have a dreadful stereotype (the young black man dancing to show he has ‘soul’, getting all the dull rich white folks to loosen up and join in) and a cringeworthy moment. Forcing Philippe to sit and watch this merriment around him seems like some sort of perverted inverse Ludovico technique, for both the audience and him. There are also a number of scenes played for laughs that seem incredibly misjudged. Driss violently intimidating a school child half his size? Hilarious. Scrambling the emergency services for kicks whilst smoking weed? Side-splitting. Omar Sy in a suit being told he looks like Barack Obama. Wait, what?

UNTOUCHABLE feels a lot like SCENT OF A WOMAN (itself a remake) with added racial stereotypes. The opening scene, where Driss recklessly drives a Maserati and attracts police attention, brings to mind a scene with a Ferrari from that 1992 film. The character dynamic also feels very familiar. The film may be in French, but what we have here is the classic (and done-to-death) Hollywood buddy movie, and not a particularly remarkable one at that. You can’t help but think UNTOUCHABLE would be getting a lot more continental flack if it was from the other side of the Atlantic.

“The film may be in French, but what we have here is the classic (and done-to-death) Hollywood buddy movie, and not a particularly remarkable one at that.”

The character of Driss flirts dangerously close to a hybrid of the “magical negro” character, that is rightfully so reviled now, and the “noble savage”. It just so happens he comes from a racially homogeneous ghetto rather than a remote geography. In Driss comes, waves his wand and everything magically works. The film hits upon one good concept – the role of carer requires more than pure mechanics – and does nothing with it apart from twee set pieces. Despite the potential undertones inherent with a French setting, the incredible lack of peril or clash in the film’s central relationship (even if it does have admirable chemistry) makes the film a well-intentioned but misguided mess of gooey positivity that strikes a grating symphony of false notes.

It’s also questionable that the film recasts Driss from Algerian to the slightly less politically charged Senegalese. The exact veracity of the tale – “Based on a true story” – is besides the point; UNTOUCHABLE is an asinine and cloying film, despite the warmth generated by Omar Sy. There is supposedly (and inevitably) an American remake on the way, and based on this evidence I won’t be touching it with a bargepole.