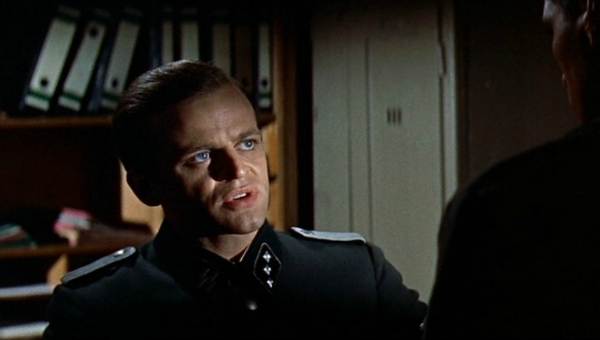 Today’s date in 1944 saw the Red Tide in full flow. On the Russian-German front, there thrust through the mud not crocus buds but the stiff, leather fingers of the December dead. In Berlin, the bombs had forced cherry trees into early blossom months before. These pink petals bob over the opening titles of Douglas Sirk’s A TIME TO LOVE AND A TIME TO DIE, based on Erich Maria Remarque’s novel (many of his earlier books had been burned by the Nazis).

The opening scene is filled with the bickering of a ragtag battalion which evokes Goscinny and Uderzo, the cod-Kraut accents misfiring from Middle Eastern to Irish – a shoddy effort which nevertheless can be seen as illustration of the cross-cultural relevance of the film. These soldiers are German, but they represent the timeless universality of “all your base are belong to us”, its impact on the conscripted human agents of war and on their civilian loved ones.

If Hitler were to feature in this film, Cesar Romero would somehow be no sore thumb.

If Hitler were to feature in this film, Cesar Romero would somehow be no sore thumb. Hitler’s henchmen do feature briefly – a pair of Dresden dolls looking just as you might lazily imagine them – and Klaus Kinski cameos as a Gestapo chief. However, the focus is on the everyman taking furlough. Smouldering stud John Gavin plays Ernst Graeber, a chap who plans to spend his leave searching for his mummy and daddy, but finds factory worker Elizabeth (Lilo Pulver) along the way – and tries to de-louse himself in her love. Elizabeth is also desperately grasping at any scrap of normality – when the sirens begin, she waters her parsley pots. Parsley is a humble frivolity, a garnish or a breath freshener – it’s also the only speck of green or growth to be seen in the crumbling city.

John Gavin’s Graeber could have leaped A-Ha style from the sketchbooks of Sirk’s contemporary, the fetish artist Touko “Tom of Finland” Laaksonen, who often dressed his pencilled hunks in army gear. Gavin would have made a dumb Bond – he lost out to Connery. He is earnest and unsubtle, and has no apparent facility for foreign accents. In A TIME TO LOVE AND A TIME TO DIE, the bare tincture of German that is detectable in his performance results in certain twists of pronunciation, the most unfortunate being his repeated variations on “My parents are bummed out… I don’t know where they are.”

Gavin fought in the Korean War, and may well have been witness or even party to atrocities such as the No Gun Ri Massacre – civilian killings which are reflected in the bookending scenes of the film, where the frustrated soldiers execute terrified villager “guerrillas” in the absence of any more tangible enemy (Events such as this are widely thought to have sparked an obsession with the zombie motif that endures to this day). If Graeber was the new Rock Hudson, his comrade is a desperately posturing predecessor to Private Hudson from ALIENS: “We’ll annihilate them every year, sometimes twice a year!” Graeber himself is introduced as a cold-hearted, cynical creature, whose sardonic taunting of the battalion’s prisoners pre-empt his future girlfriend’s declaration that a flirtation with evil is as damning as a full-time career in cruelty.

A TIME TO LOVE AND A TIME TO DIE was also known as WILL O’ THE WISP – a legendary apparition which is usually said to guide lost travellers to safety or to death, whichever it deems most just. The German version of the “Will O’ The Wisp” is the Irrlicht, a word derived from irre (lost, deluded or deceived) and licht (light). The Irrlicht bobs glowing in the woods and leads people from the safety of the path, regardless of their virtue, as wolves lure little girls. But whether you are going to heaven or to hell, now is the only time there is. Every time you kiss someone, or paraphrase Graeber’s killer line “Your eyes are more beautiful every time I see them – except this time looks like the next time”, someone else in the world is oppressing, torturing, exploding. All the more impetus to live in the moment – and the soap-operatic Sirk certainly appreciates the spiritual value of cherry-tinted glasses and the power of camp irony.

When the soldiers return to their homeland, they are denied the eagerly awaited familiarity which bolstered their spirits on the battlefield. Their homes and families are ravaged by war, and they struggle to cope with the changing face of the home front. Hermann Boettcher (Don DeFore) is lucky enough to find his wife alive and safe but can’t accept her weight loss: “I love my wife, but I needed all of her”. Graeber and Elizabeth wangle their way into a louche, illegal drinking spot as their courtship comes into flower, and the party continues in the cellar when bombs begin to fall. “Enjoy the war, my friends,” warns the lounge singer; “the peace will be awful”. Indeed, towards the end of the film, the immediacy of the lovers’ relationship leads to marriage, and Elizabeth’s pregnancy throws up the possibility of life in awful peacetime (those interested in the fruition of a wartime relationship unexpectedly granted longevity might do well to seek out the semi-autobiographical The Prophet Bird by Esther Terry Wright).

Oskar Binding, the liver-lipped district leader, was a schoolboy when he was first friends with Graeber, and is still a schoolboy at heart. His character represents the blurring of morality – a good-hearted child growing into a man whose ignorance and greed draw him bumbling over to the dark side. The character of Binding has counterparts in Louis Malle’s Lucien Lacombe or more recently, the character Horst Prohaska in Jan Hrebejk’s excellent MUSÍME SI POMAHÁT. In Graeber’s first topless scene, Binding dusts our hero’s brick-like boobs with lilac bath crystals and tells him how he has put one of their erstwhile schoolteachers in a concentration camp – just for a little while, to teach him a lesson. “Holy jumping jupiter!” Graeber ejaculates, wondering for a second if Binding has the power to free his girlfriend’s father from the camps, and then turning his attention back to the bubbles and brandy treatment his privileged friend has bestowed.

We have Sirk to thank for John Waters’ masterpieces – the colour and shape of Sirk’s melodramas (whose irony was overlooked for many years after they were made) styled the dumb hunks and gurgling girls whose successors burst out in Waters’ POLYESTER and HAIRSPRAY. A TIME TO LOVE AND A TIME TO DIE shows a darker side to Sirk’s sense of romance, and the touches of humour and originality add substance. He places among the ruins a bombed piano playing its own exposed strings, an inky horse-drawn hearse and an oblivious cat that’s lost his flap. Graeber is keen to ensure that his girlfriend should be financially secure in the certainty of his death – but because Elizabeth’s father is a political prisoner, their application for marriage puts the couple at risk of exposure. During a nerve-wracking visit to the registry office, Graeber is faced with the added discomfort of an encounter with a wonky-eyed clerk who at first seems to pose an icier challenge even than Jerry Segel, the ocular albino of WAYNE’S WORLD. But where Wayne Campbell struggled to keep his composure, and to keep foot from mouth, the blunt stiff Graeber brings the issue out into the open immediately, and in doing so finds that the glass eye is no MacGuffin.

A TIME TO LOVE AND A TIME TO DIE sits well with society’s current yearning for escapism and frivolity, as well as its obsession with the second world war. Remarque’s novel was very graphic in its description of decaying morality, society and bodies; the film adaptation is bronzed and bright, and yet there is still plenty for the 21st century schadenfraude gourmet. Why do memes exist inspired by Hirschbiegel’s DER UNTERGANG but not by Stalin or Mao? Why does Channel Five think that history began and ended in the early 40s – never a feature on kulaks, gulags or and Hutus? Is it Saxon guilt and the need to understand this specific, close-to-home atrocity – and if so, will such understanding ever be possible? As Elizabeth tells Graeber, “If you can grasp it then you’re no better than the ones who caused all this”.