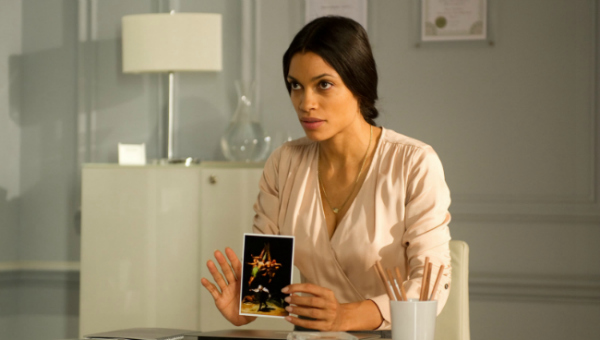 Now that Danny Boyle has finished making the Queen skydive and beaming Frankenstein productions worldwide, TRANCE marks his return to work behind a camera. But although TRANCE is engaging and evokes Boyle’s finest work, the chronic lack of empathy and extremely neat framing of the plot ‘twists’ mean that, in the long run, it will be no more than a footnote in his career.

James McAvoy plays Simon, an art auctioneer and robbery inside man who plans to double cross his criminal partner Franck (Vincent Cassel) in the theft of Goya’s £25m ‘Witches in the Air’. Taking a severe blow to the head (from Franck, of course), Simon forgets where he has stashed the canvas and the criminal gang gets him to enlist the help of hypnotherapist Elizabeth Lamb (Rosario Dawson) to tease it out.

In some ways, TRANCE is familiar territory for Danny Boyle – a heist tinged with psychological intrigue and the mentally unhinged. Once the junky fog clears, the plot of TRAINSPOTTING – whilst secondary to many elements – converges on a robbery. SHALLOW GRAVE, which announced him on film with such a splash, featured disparate friends squabbling over the spoils of a crime. As that would indicate, along with SUNSHINE, discord and backstabbing between flawed characters is a feature of Boyle’s work. Whilst TRANCE certainly brings his best to mind, the end product lacks some of the empathy and humanity present in Boyle’s earlier work – particularly with John Hodge, who wrote the screenplay here (Hodge was screenwriter for SHALLOW GRAVE and TRAINSPOTTING).

This isn’t to say TRANCE isn’t an engaging film, it just lacks some of the lower-key subtleties that have elevated Boyle’s direction before. A number of elements – the hints towards plot twists, the soundtrack and even the location – detract from the human elements of the script. The soundtrack rarely lets up from the tub-thumping Underworld beats – again, this has been a feature before (SLUMDOG MILLIONAIRE, 127 HOURS) but it’s worth remembering that even TRAINSPOTTING had room for Lou Reed alongside ‘Born Slippy’. In particular, the contrasting plinky-plonky music used alongside the hypnosis scenes feels painfully on the nose. It’s what INCEPTION might have sounded like if scored by the Apple Inc. marketing team.

“Noir is usually cold. I wanted it to be more emotionally charged.”

The cold, blue glass of 21st century London adds to a feeling of sterility – the cobbles of Boyle’s Edinburgh (often a disguised Glasgow) or Widnes from MILLIONS are a long way from this shiny version of the capital. Franck’s flat has more in common with Icarus II spaceship of SUNSHINE. Hodge’s script also has less of the black humour – one pink car aside – and the end result is disappointingly generic. A little bit ETERNAL SUNSHINE, a little bit VANILLA SKY and a dash of OCEAN’S 11 – but not nearly enough of the stylish ingenuity Boyle manages at his best.

Danny Boyle is on record as saying he wanted to “give [TRANCE] a contemporary spin in terms of emotion. Noir is usually cold. I wanted it to be more emotionally charged”. In this respect, it has to be said that TRANCE falls short – but this doesn’t mean it falls flat. James McAvoy is as watchable as ever, particularly when he gives way to a rougher Glaswegian edge for some final scenes. Each character’s’ progression is overly rapid but still compelling. Their constantly off-kilter world (quite literally, due to Boyle’s enduring fondness for jaunty angles) and the heart-stopping sound keep the audience on edge, and distract them  from the ridiculously high-concept central premise. It’s doubtful TRANCE will actually keep you in a state of transfixion, but Boyle choreographs his outlandish plot towards an exciting and even brave conclusion which restores some integrity to the film.