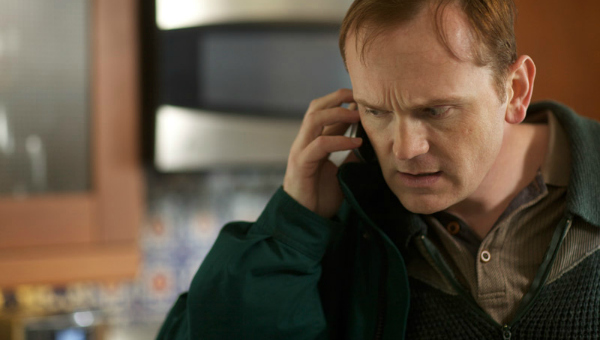 The real-life incidents which inspired COMPLIANCE are very difficult to accept or comprehend. In the mid 90s, 70 fast food restaurants across the US reported prank calls from fake cops creating scenarios in which middle management were coerced into humiliating and abusing junior staff. It didn’t always work, but when it did, situations evolved that were as bizarre as any urban legend, and as fascinating as any Milgram or Stanford style experiment.

In the right hands, a dramatisation of the subject matter would appeal to amateur social psychologists and pub philosophers without sensationalising the issue. Craig Zobel’s gauche exploration of the most extreme strip search prank call scam on record, though, is discomfiting and frustrating both in its subject matter and in its handling. We can only speculate as to how the prank caller was able to orchestrate and escalate the situation so rapidly. Zobel makes the compelling hypothesis that the caller was a credit protection salesman who used the tools of his trade – cold reading and compliance techniques. Most of the time, we can hear “Officer Daniels” (Pat Healy) on the other end of the phone as he charms and chides store manager Sandra into detaining her employee Becky, whom he falsely accuses of theft.

Healy’s dialogue is largely improvised – Zobel had his subjects question “Officer Daniels”‘ instructions, and Healy’s increasingly hesistant and cobbled-together comebacks become less convincing as Sandra hands over the phone to her fiancée and the situation exacerbates. Sandra, the complicated and bitter heart of the film, has at this stage returned to front of house, leaving the most dramatic events to hang on a trio of characters whose portraits are superficial in comparison to hers. A man pursuing his dark erotic fantasy to a triumphant extreme; another man who allows himself to be manipulated into debasing a stranger – Zobel and his cast hazard a guess at what was said over the phone, but the inexorably long takes, focussing on the finer detail, are frustrating. We need to look more closely at the people involved. Each actor – particularly Ann Dowd, Pat Healy and Bill Camp – was encouraged to collaborate in building their own back stories and psychological motivations. But we don’t spend enough time with Becky either to share her claustrophobia and spiritual breakdown, or to learn more about her character.

Look at Louise Ogborn, the actual victim, pictured above on the far right – someone fresh faced, forgettable, vulnerable. Dreama Walker, in the first three images (which are taken from screenshots of the film), is conventionally attractive, charismatic, composed. Does she look like someone who would let herself be detained and abused? Do you think you could handle seeing her in a film, portraying a two-dimensional stock babe character, grumpily stripping off and giving a trucker a blowie offscreen? Could you bear to watch a more accurate reconstruction, based on security footage showing the tearful Ogborn doing the same things? No wonder Zobel shied away, his camera fidgeting off to “Officer Daniels”‘ house, breaking the tension and adding to the cheap drama feel. Real life magazines, albeit more knowingly, fall foul of the same problem. Rape victims sell stories that are illustrated in vignettes posed by models – images that look like the front covers of bodice rippers. It’s tragically easy to forget that there are real people behind the sensational pulp horror.

The bizarre facts of the original case are padded out into such an apocryphal narrative that COMPLIANCE can almost be enjoyed as an example of the standard male-gaze erotic humiliation that’s a standard in most popcorn horror. Perhaps it’s the resulting doublethink that has triggered such a hysterical reaction from some critics. Becky is just like any Last Girl Standing – terrible things happen to her but she always seems to bounce back, every fresh hell adding to her moodiness and exasperation but never provoking a convincing display of fear or suffering. That’s why WOLF CREEK was so upsetting compared to its contemporaries: it might have been a paint-by-numbers teen hiker horror, but Kestie Morassi’s crying and begging traumatised the film crew as well as the audience. The predator in COMPLIANCE may be small fry compared to a sadistic murderer, but Becky never weeps on her manager’s shoulder as Louise Ogborn did; Becky is helpless but never supplicatory or stricken.

[Zobel] leaves us bored, anxious and confused by a film that’s hard to distinguish from a standard horror

Zobel’s next project? Only an adaptation of one of the best post-apocalyptic sci-fi novels ever. Robert C. O’Brien’s Z For Zachariah is bleak, beautiful, exciting and convincing. An ordinary young girl is running her family farm alone in a valley that survived a nuclear war. It’s a simple and powerful story rooted in the famous two-sentence horror story, “The last man on Earth sat alone in a room. There was a knock at the door…” With Tobey Maguire producing and starring, we can only hope it won’t be reduced to an emo-gothic romance, and that the ultimate Last Girl Standing won’t look like a cheerleader.

John Waters ranked COMPLIANCE alongside other challenging 2012 favourites including THE IMPOSTER and MARINA ABRAMOVIC: THE ARTIST IS PRESENT. He probably appreciated it on all its levels – from its documenting and dramatisation of a seedy true crime to the guilty pleasure of its borderline erotica. Zobel hoped to provoke debate with his film – but he strove to avoid imposing his own perspective on the film. Based on such shaky foundations, any discussion is likely to quickly fall foul of Godwin’s law before petering out.

If you’re interested in the social psychology behind the crime, read research on compliance, look up the 16mm Milgram films and watch Derren Brown perform “mental mugging”. Watch Eli Roth’s recreation of the Milgram experiment, which included female subjects. Read “The Lucifer Effect” by Philip Zimbardo – it sounds trashy but it’s not. Follow the careers of the excellent actors in the film (most have a theatrical background), certainly. But don’t watch the film unless you have a stomach for schadenfreude, sluggish pacing and bewildering narrative. Zobel has style, courage, curiosity, an excellent rapport with his cast and crew – he’s just too green and innocent to tell this story, and leaves us bored, anxious and confused by a film that’s hard to distinguish from a standard horror. COMPLIANCE is like a Chickwich without bacon – and as the delivery guy warns in the opening scenes, “you’re fucked without bacon, I’ll tell you that”.

5 thoughts on “Compliance: the McSploitation of real-life horror”