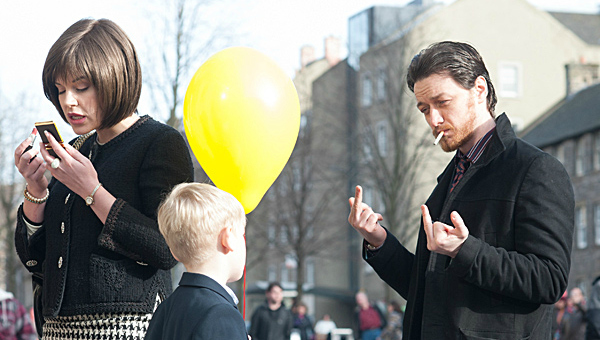 Any adaptation of Irvine Welsh’s prose on film will inevitably be held up against the 1996 modern classic, TRAINSPOTTING. FILTH – the most accomplished attempt since Boyle’s junky drama – seems even more lurid, and even more morally dark in its humour. Although it often stumbles into gaudily hedonistic mud-rolling, Jon S. Baird’s film boasts a bold tone, sharp dialogue and a towering performance from James McAvoy.

McAvoy chews up the script as Bruce Robertson, an Edinburgh police detective after a coveted promotion to Detective Inspector. Along with his peers, he jumps through hoops in solving a recent murder case to impress his superior, Superintendent Bob Toal (John Sessions). But Robertson’s penchant for drugs and alcohol – and his compulsion to impress a curiously absent wife – ramp up as his mental and physical state spirals down into hell.

… it’s not so much black humour as a brown sugar cube stirred into a barrel of crude oil.

The humour behind FILTH treads a fine line: it’s not so much black humour as a brown sugar cube stirred into a barrel of crude oil. Robertson’s mental descent creeps up on the viewer, ambushing them with the more hallucinatory and bilious content. Even if Baird lacks the same level of visual flair that Boyle brought to TRAINSPOTTING, the choice of lines in the opening few minutes could be seen as an attempt to stand apart. “It’s great being Scottish, we’re such a uniquely successful race,” intones Robertson as he strolls through Edinburgh’s Old Town, before reeling off the list of inventions and discoveries which, given enough beer and prodding, any Scot usually rattles off with aplomb.

Although the statement is delivered with accompanying visual irony, Bruce stands in marked contrast to Mark Renton, cold in the dreary Highland countryside, famously ranting about Scots being the “most wretched, miserable, servile, pathetic trash that was ever shat into civilisation”. It may not end up on posters as John Hodge’s famous ‘Choose Life’ monologue did, but Baird’s adapted script is often razor sharp, and doesn’t shy away from aspects of Scotland that you won’t find on shortbread tins. When John Sessions’ superintendent, in defence of his not-so-latent homophobia, declares “This is not ‘some parts of the country’ – this is Scotland, by Christ!”, it’s simultaneously hilarious and disconcertingly familiar.

Underpinning the whole endeavour is a truly superb performance from James McAvoy. This is perhaps his best performance since his rise to prominence…

From the easy sparring between the police, rat-a-tat interrogations conducted by Detective Lennox (Jamie Bell) and Robertson, to Eddie Marsan’s bespectacled Freemason colleague and his wife Bunty (Shirley Henderson), the true strength of FILTH lies in the performances. This is perhaps James McAvoy’s best performance since his rise to prominence: as Robertson begins to crack, the manic and fragile mental state can be seen behind McAvoy’s eyes, making his psychological descent all the more affecting.

FILTH is, as one might expect, a difficult film to process, with what might be seen as a slightly absurd revelation. The ending could also be argued as lacking conviction, with a withdrawal from the repulsive portrait that has been painted of Robertson up to that point, although that would be to ignore his larger arc. Regardless, FILTH should reward you with a simultaneously manic, darkly comic and repulsive sprint through the twisted corridors of a crumbling mind.