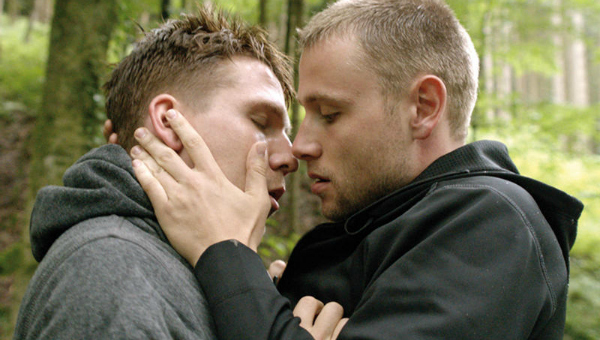 2013 has been a significant year in terms of controversial news surrounding gay cinema; Steve Soderbergh made no secret of the fact that the production of his triumphant BEHIND THE CANDELABRA was fraught with green-lighting issues, brought about by the flippantly homophobic assessment by a number of studio heads that the film would ‘too gay’ to be successful. This resulted in CANDELABRA being financed by HBO, releasing on American network cable and given limited theatrical release: although it would have been a heavy contender, it was discounted from the Oscar ceremony. Elsewhere, the hugely promising Freddie Mercury biopic, which was to star Sasha Baron Cohen, disintegrated as Cohen backed away; citing the filmmakers’ family-friendly vision as too jarring a creative choice for his artistic integrity to overcome.

FREE FALL (Freier Fall) boldly channels BROKEBACK MOUNTAIN in an industry that hasn’t fully buried the hatchet. The fundamental parallels are too strong to disregard: FREE FALL and BROKEBACK both take no-frills approaches to the portrayal of a doomed extramarital homosexual love affair, in an unforgiving society; with limited artistic license taken in its storytelling. Cowboys are swapped out for policemen (both fitting the symbolism of masculine occupations that connote schoolboy dress-up), and ‘fishing trips’ become secluded forest jogging sessions. Neither film can stress enough that they are not about what it means to be gay, but are stories of forbidden love; and what it means to lead a secret life.

Where FREE FALL becomes its own film is in its implication that love is socially cyclical: that the lovers, Marc and Kay, are in the same process of sexual awakening in different stages. This rich idea is rendered masterfully in the final shot of the film, with Marc running through the ranks of his peers to become the front runner, to become distinct and uncovered, as we see Kay do at the films opening. The theme of running is the frame within which the picture hangs, working as deft symbolism for shirking responsibility and judgment in an effort to be free.

FREE FALL pronouncedly struggles to be its own film: the similarities to BROKEBACK being so close that the audience knows every turn of the narrative arc some time in advance. An improvement that could have staved off such comparisons – although one that might damage the consummate bookending scenes – might be to have the film begin from its more enthralling latter half, in which the veil is lifted off of Marc’s secret double-life. The film ends with Marc adjusting to a life as a confirmed homosexual in exile from his wife, child, family and lover – and we are left to only imagine the dramatic potential of this new life.