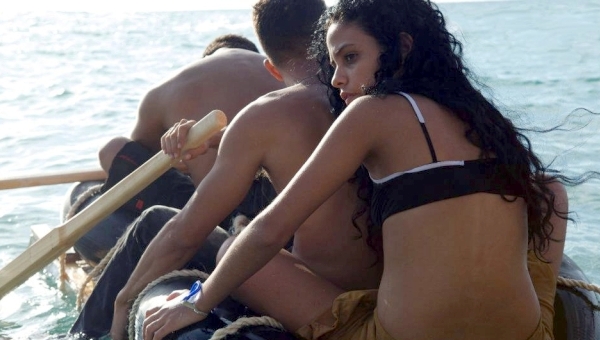 A pulsatingly put together drama that also offers some unlikely, winning nuggets of light relief, UNA NOCHE is shot with all the urgency and sweat-soaked lens caps one would typically associate with the Jason Bourne trilogy. Set over the course of a single day, Lucy Mulloy’s debut feature follows three Havana teenagers and their respective attitudes towards their impoverished circumstances. Elio longs for a fresh start in the promised land of Miami, Florida, as does his wise cracking, shambolic best friend Raul but both are conflicted by family ties; Elio uneasy at the thought of leaving behind his beloved, introverted twin sister Lila, who narrates the film, while Raul has a gravely ill mother that depends upon him almost entirely.

Mulloy’s approach to the story is to match stride for stride the physical momentum of her vibrant young characters, and as a result the first two thirds of the film gallop along at a breakneck speed. Each lead has their own cross to bear: Elio holds a deeply hidden secret that inflames the internal tug of war between doing right by his sister and doing right by himself, while Raul is an impulsive, chippy and highly charismatic individual who dreams of a reunion with his estranged, near mythical States-based father. It is he who very much represents the emotional centre of the story and the way in which the stakes on display toy with his emotions make for UNA NOCHE’s most compelling moments.

an intriguing, perhaps even bewildering cocktail of comedy and tragedy

In lieu of authenticity, Mulloy opted to cast non-professional locals in the lead roles and of the three the stand out is Daniel Arrechaga, who’s mixture of verbal jousting, chaotic physicality and bruised melancholy make Raul such a magnetic character to follow. Unfortunately Lila has a less dynamic narrative arc than the two boys; her scenes are more sullen and less action orientated, but the well written voiceover from her perspective at least helps steady proceedings when the frenetic camerawork occasionally outpaces the wider story at hand.

As a first time feature director, Mulloy deserves great credit for seeking out inventive and fresh framing for this clammy and often highly claustrophobic tale. Her writing is richly derived from time spent on the ground with locals and the dialogue feels unshowy and believable. Bravest of all is Mulloy’s decision to slow the film’s pace down several gears during the third act, a move that sees an intriguing, perhaps even bewildering cocktail of comedy and tragedy rise to the surface. Some of the film’s most heartening and enjoyable moments occur at this juncture, beautifully realised by the young actors, and marred only by a rather stammering finale. Nevertheless there is a matter of fact likability to UNA NOCHE; it is a well crafted, impassioned work that suggests this may be a filmmaker with a promising future and a lot to say.