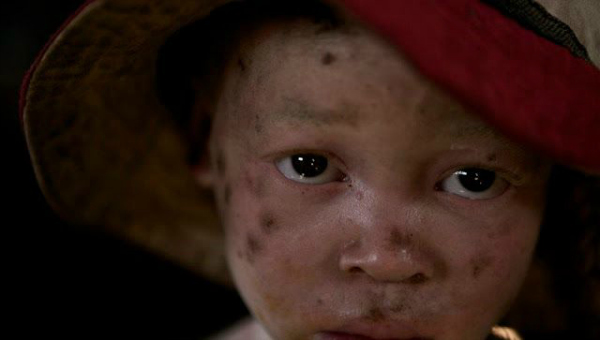 IN THE SHADOW OF THE SUN is a documentary by Harry Freeland which explores the situation in Tanzania for the albino community. A significantly higher proportion of the population is affected by the condition, where a recessive gene results in a much lower level of melanin in the skin, causing problems from poor eyesight to an increased risk of skin cancer.

However, over the last few years the medical problems have paled into insignificance to the physical threat to the lives of the albino community. Witch doctors have begun spreading beliefs that the body parts of albinos can possess magical properties, bringing wealth and good fortune to those using them. Albinos are being actively hunted, and live in fear for their own lives.

Freeland’s documentary tracks the story of two members of the community over an extended period. As many albinos are rejected from conventional schools, being hounded out as “ghosts” or “white devils”, education is often also a problem. Josephat Torner has dedicated his life to the education of his fellow Tanzanians. He travels the country, often at risk to his own safety, in an attempt to change attitudes. In the course of his travels he encountered a teenage boy named Vedastus, who had a keen mind and a desire to integrate, but had been removed from his local school and could not get into the heavily oversubscribed local albino school.

IN THE SHADOW OF THE SUN is not without hope, especially in the form of Josephat and Vedastus.

Freeland’s documentary is shot without flash or gimmicks, which allows the power and desperation of the story to come through clearly. Other documentaries such as CALL ME KUCHU in recent years have also highlighted intolerance in African countries, but the sheer scale of the fear and hatred is both breath-taking and desperately sad. From the sight of a young girl whose arm was chopped off by desperate attackers, to the Tanzanian Prime Minister in tears of sheer frustration with his own people, the witch doctors have created a deadly environment for all albinos, forcing them into camps with poor hygiene and requiring them to have armed protection. When even the graves of the dead have to be covered in six feet of concrete, the scale of the problem becomes abundantly clear. There’s an ever-present atmosphere of tension, especially on a trip to an underground cave to meet one of the witch doctors, and Freeland isn’t afraid to point his camera to where the crucial questions need answering.

But IN THE SHADOW OF THE SUN is not without hope, especially in the form of Josephat and Vedastus. Given not only their physical impairments but the lifetime of abuse and threats to their existence, Josephat remains remarkably defiant and the continued abuse and treatment of those with the condition seems only to spur him to further activism. It’s his exuberance and his care for the likes of Vedastus that temper the desperation of the situation and give hope that the current situation may eventually be resolved. IN THE SHADOW OF THE SUN is a powerful work, one which highlights another unfortunate reality of life in the third word, but also the work and progress being made to change attitudes and to improve the quality of life for albinos across Tanzania.

IN THE SHADOW OF THE SUN screens at St Philip’s Church Centre at 08:30 pm on Thursday 26th September. Click here to book tickets.