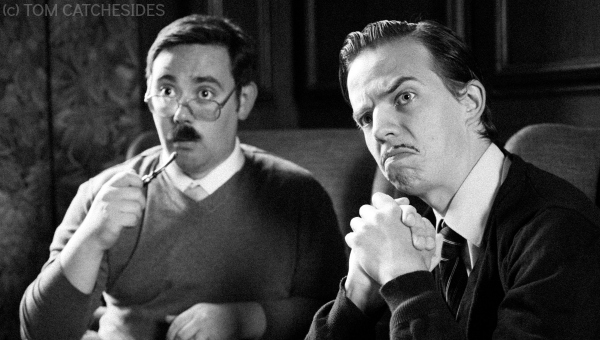 Cambridge film making collective Project Trident have held TRIDENTFEST, a showcase of independent film, at the Cambridge Film Festival for several years. Ahead of this year’s event,  Mark Liversidge spoke to Carl Peck about the work of Project Trident and their plans for this year’s festival.

ML: As TRIDENTFEST has evolved over the course of time, has it been difficult to fill a programme each year, or has it spurred you creatively?

CP: Bit of both I guess. We’d be making films and screening them anyway, but it does give you a bit of a kick to get things done. We used to have to ask to show films here, and now they ask us. We’re not an official selection of the film festival, but as we’re late night we have a fair amount of free rein to do whatever we want and they don’t vet the films, usually because they’re not finished in time!

ML: So, four days before the festival screening, how ready is it?

CP: Pretty good. I’d say it’s around 70% there, which is better than normal. It used to be a real mission as to how we’d screen films, as they’d be on DVDs and they’d always break, but now the projection is digital so we can convert the films in advance and we’re pretty sure they’re going to work. It also gives us an incentive to get them done. The rest are just finishing touches, or films like Rydian’s. He was in New York yesterday with the world premiere of his film, and now he’s coming back to show the UK premiere with us.

ML: Is there anything you’re most proud of from your years with Trident?

CP: THE PURPLE FIEND [a thirty minute short film made by the collective and shown at Tridentfest in 2011] is a highlight, but it took about two years to make. I’m really proud of the 48 hour film we made this year, for the Sci-Fi London Film Festival competition. There’s also a “making of” which Ryd’s made. [Both will be shown at this year’s TRIDENTFEST.] It was different factions coming together, and we did all the post-production in one house. We used to make films originally together, but more recently it’s been smaller groups and crossing over into each other’s teams. This was also a road test for our ability to work together and for our planning, as we’re talking about making a feature film in the future.

ML: We now live in the YouTube generation. How much difference is there between picking up an iPhone and the process you’ve gone through for the competition?

CP: We didn’t start doing that, you don’t need all that to start with but we’ve progressed since we started and are now getting people involved and the team’s grown so we can do that sort of stuff. There’s always someone out there who’s in a band and you can ask if you can use his music. You’d think you couldn’t make a film, but the more people you ask the more it escalates.

ML: Music videos have also been a feature in previous years, is that something that’s happening this year as well?

CP: I think I said last year that I wasn’t going to do any more for free, and the one film I have this year is a music video! The one I’m doing is with a rapper from Peterborough who’s a really nice guy who was featured on Radio 1 Xtra recently.

ML: What are the highlights of this year’s programme?

CP: We have fourteen films on the list this year. We have some of Simon’s crazy films he’s been making in Bristol, the return of Simon and Andrzej’s Poo Brothers films, three new ones from them, a really trippy one called Brian. There’s also one file in projection that no-one’s heard of – who knows what that’s going to be? It usually comes together on the night, you never know if anything isn’t going to be ready or broken, so even if we haven’t collectively seen them we know what they’re about and we can loosely gauge the vibe. We’ll also have some news about our future plans, which hopefully include a feature film.

Book tickets now  for TRIDENTFEST on Friday 27th September at 23:00. It usually sells out fast on the night.