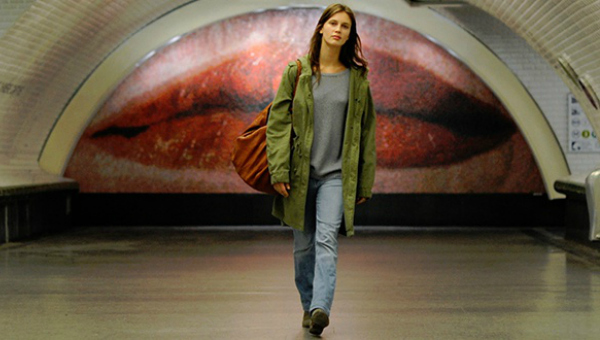 Say what you like about Francois Ozon: he constantly manages to wrong-foot you. Few would have expected the sun-drenched psychological thriller SWIMMING POOL to follow the delirious set-bound pantomime of EIGHT WOMEN; or the sinister complexities of IN THE HOUSE after the loving recreation of the seventies stage hit POTICHE.

And JEUNE & JOLIE sets off like an homage to Eric Rohmer, with a very old-fashioned “binoculars” shot of 17-year old Isabelle (Marine Vacth) topless on a beach in the south of France, spied on by one of those hapless boys on holiday (Fabrice Luchini successfully parlayed this bewilderment into middle-age in Ozon’s recent work). Isabelle belongs to a classically bourgeois French family, and seems in no need of money to pay her tuition fees at the Sorbonne come the autumn (again, in a nod to Rohmer, the film is divided into seasonal sections). So it comes as a shock to discover that in free non-study periods, Isabelle becomes “Lia”, dressing in her mother’s best blouses and having sex with well-heeled businessmen at 500 euros a time.

Why? Unfortunately, after this gripping set-up, JEUNE & JOLIE never explains.  We would seem to be in BELLE DE JOUR territory, but Isabelle’s motivation for dabbling in prostitution remains as blank as her face during sex. There is no psychological reason given, no secret waiting to be revealed. The film suffers from multiple identities, jostling for supremacy. After a brisk montage of Lia’s assignations, a major plot development seems to lead towards a melodramatic policier, with the appearance of scruffy cops straight out of Engrenages (Spiral). But then we’re back to the family drama again, with the suggestion that Isabelle will seduce her stepfather and cause domestic pandemonium. That strand, too, takes an unexpected turn which eventually leads nowhere.

But maybe this is all Ozon’s intention, his take on what it means to be seventeen and with an awakening sense of power not only over men, but also of having control of your own destiny. This would explain the appearance of Charlotte Rampling, in a “that kid reminds me of myself” moment, as the director’s enigmatic muse and spokeswoman. Needless to say JEUNE & JOLIE is beautifully acted (particularly by Frederic Pierrot and Geraldine Pailhas as Isabelle’s parents ) and filmed: even faceless international hotels look ravishing. But in a way, that sums up the whole production: handsome trappings hiding empty interiors; nothing to remember after checking out except the flawless stare of Marine Vacth, with cute Francoise Hardy tracks about loss of innocence and so forth, sounding like elevator music in the background.

One thought on “Jeune et Jolie”