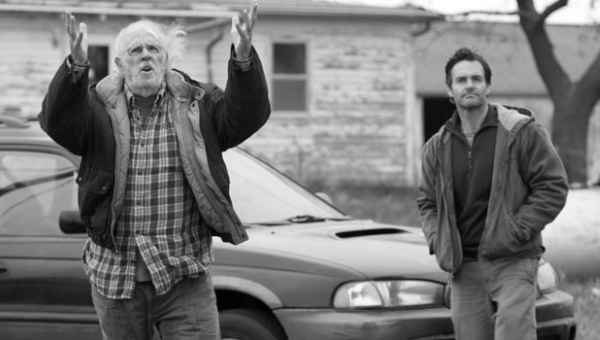 Road movies (and those set on trains) are a gift to writers and directors, as they take a lot of the pressure off developing a plot by driving it towards a destination. Not that there’s much plot to drive in NEBRASKA, which opens flatly and somewhat dully as elderly Woody Grant (Bruce Dern) is picked up by the local sheriff wandering up the highway out of the small town of Billings in Montana.

Woody is collected by his son David (Will Forte) and taken home to his resigned wife Kate (June Squibb). So far we could be watching a depressing documentary about Alzheimers sufferers in the mid-West, shot in wide-screen monochrome against a deadly landscape of oil refineries, strip malls and recession-hit businesses such as the “hi-fi shop” where David works as a salesman.

But then, an escape route is offered by an ornate letter telling Woody he’s won a million dollars. Of course it’s bogus junk mail, a magazine subscription come-on, but Woody clings to it as though his life depended on it. He’s convinced that his chance to become a millionaire is a mere three states away, in Lincoln, Nebraska where the cheque awaits. This explains his repeated efforts to leave town, on foot if necessary: he’s lost his driver’s licence, most likely due to alcohol problems at this stage only hinted at.

David humours Woody by helping him “collect”, seeing this as his own chance to escape from a dead-end job and unsatisfactory on-off relationship (as Woody harshly puts it to his son, “What else you got going on?”). So together they set off on a journey through not only Wyoming and South Dakota but also the Alexander Payne territory mapped out in SIDEWAYS and ABOUT SCHMIDT, two other stories about dysfunctional men in cars travelling across the States on voyages of discovery. The landscape, beautifully shot by Payne’s regular cinematographer Phedon Papamichael, is as arid as both their quest and their relationship; including a disappointing sight-seeing stop at Mount Rushmore (rivalling SPINAL TAP’s visit to Graceland in its pointlessness).

Alexander Payne demonstrates a humanity that has defined his career…

But then the emotional pace picks up when Woody loses his false teeth in a boozy fall by the railroad tracks. This set piece is deadpan, hilarious and reveals that Woody has retained some of his marbles – if not his upper plate. Bob Nelson’s laconic script really kicks in when, against Woody’s wishes, David drops in on the small-town family Woody left behind. David’s bozo nephews, when not slumped in front of the TV, are out doing community service for rape (“sexual assault”, one of them demurely corrects) and his brother Ray is played by Rance Howard, one of the many octogenarian actors and non-actors gracing Nebraska with their perfect grizzled presences.

Woody’s past comes into focus as his family and former friends – all existing in still lives that match the landscape – think he’s come into a fortune. Petty jealousies and grudges from fifty years or more ago resurface and, in the case of his old business partner Ed Pegram (Stacy Keach), threaten real trouble. Parallel to this atmosphere of menace run more well-judged set-pieces: one at a cemetery where his wife Kate arrives with their other son Ross (Bob Odenkirk), and gives a potted scurrilous history of all those buried before her; and a gloriously botched attempt at reclaiming a disputed compressor from Pegram’s barn, involving all four Grants and preceding an equally moving visit to Woody’s derelict old home.

Throughout these scenes, Alexander Payne demonstrates a humanity that has defined his career, from an overdue rediscovery of the raucous CITIZEN RUTH, starring Bruce Dern’s daughter Laura, to THE DESCENDANTS, which added extra depths to George Clooney’s movie persona. Getting genuine comedy out of working-class characters without patronising them is no mean feat (Ken Loach can still do it over here). And in a satisfying payoff to the million-dollar plot, Woody keeps his dignity and has some wishes granted as he heads back to Billings. When the woman at the magazine office in Lincoln asks if Woody has Alzheimers, David (himself wiser and audience-pleasingly stronger at the end of their journey) replies that no, he just believes stuff that people tell him.