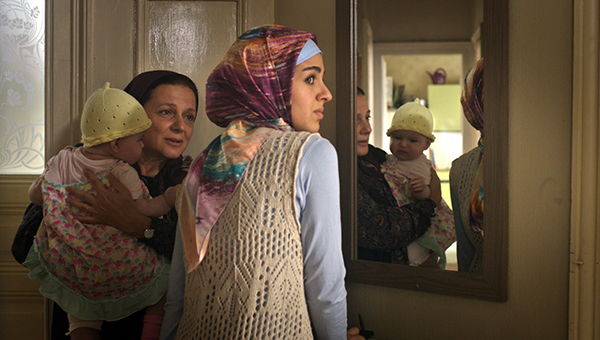 In recent years, the debate over immigration has maintained its prominence in the political lexicon. The issue of integration, especially that of Islamic immigrants relocating to Western Europe and the cultural differences often encountered, is a particular hot potato, with tabloid demagoguery often presenting the issue in simplistic and aggressive terms. Thankfully there is a growing movement in film that taking a more measured and sympathetic approach to the immigration discussion. KUMA – the debut film by Austrian-Turkish director Umut Dag – is one such film.

Addressing the difficulties faced by first, second, and third generation Turkish immigrants living in Austria, KUMA begins with Turkish teenager Ayse (Begum Akkaya) marrying Hasan (Murathan Muslu). After their arranged marriage in rural Turkey, the couple move to Vienna to live with Hasan’s family, including his overbearing and manipulative mother Fatma (Nihal Koldas). However, Ayse’s marriage is a sham devised by Fatma – the young newlywed is actually due to be the kuma (second wife) of the older woman’s cruel husband, Mustafa (Vedat Erincin). Recently diagnosed with cancer, Fatma wants to guarantee the family’s safety and comfort of her husband in case she dies. Ayse is forced to come to terms with this confusing and repressive charade, and at the same time deal with her hostile sisters-in-law, a low paid job at a local Turkish supermarket, and a relationship with her obsessive new colleague Osman (Berk Kristal).

…satisfyingly slow burning, allowing plenty of time for the performances to shine through.

First time director Dag does not rush the drama, and the complex web of family lies, secrets, mistrust, and eventual reconciliation is satisfyingly slow burning, allowing plenty of time for the performances to shine through. The two central characters, Ayse and Fatma, are particularly commendable, highlighting the conflict with the matriarch’s ridged, traditional beliefs, and Ayse’s yearning to live a life of her own. Koldas brings a sense of long suffering pathos to Fatma, a character who could have easily become a pantomime villain, but is instead revealed to be a complex, conflicted character who the audience can feel both sympathetic and resentful towards. Akkaya as Ayse develops the character strongly, starting of as a timid, confused young girl but gradually growing in stature and self believe as she is forced to finally stand up for herself.

The plot suffers slightly from a misleading funeral scene halfway through, which some may feel to be a step of narrative manipulation too far. However, in drawing attention to the people and stories behind the often cruel and kneejerk immigration tabloid headlines, KUMA feels like an important piece of work.