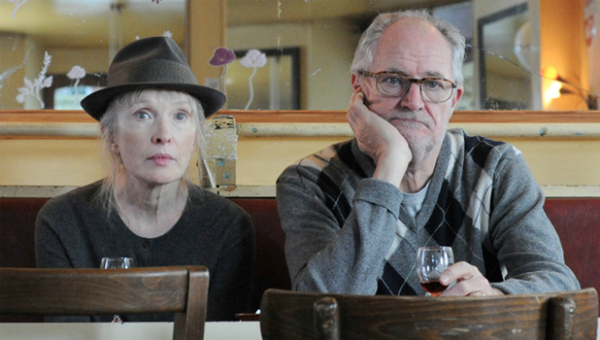 A fifty-something couple on a mini-break: not exactly an exhilarating plot line. The reaction of Meg Burrows (Lindsay Duncan) to the Parisian hotel room booked by her husband Nick (Jim Broadbent) for the trip – “a bit beige” – was how one might anticipate feeling about this film. But, you’d be quickly proved wrong. LE WEEK-END moves forward in ever-undulating waves of mundanity and bohemia. At one point Nick asks Meg if she is bipolar, and the same could be asked of the film itself as it moves between dark and light moods at pace; kissing on the street quickly turns to bitter disagreement, before returning to a childish game of chase.

For Nick and Meg, this Week-End was intended to breathe some new life into their thirty-year-old marriage. The couple bear all the hallmarks of a long relationship: she knows his “constipation face”, he is jealous of her every interaction with younger men. In this case, it certainly rings true that familiarity breeds contempt.

As expected from an academic couple (Nick is a university professor and Meg is a teacher), their arguments are well-articulated and deeply cutting. The couple bicker like the old married couple that they are, reaching a very public crescendo at a dinner party hosted by Morgan (Jeff Goldblum), a former student of Nick’s that they randomly come across on a cobbled street. The inclusion of Morgan and his young, pregnant second wife is a useful narrative device in that it juxtaposes the challenges of lifelong monogamy, at a stage when the offspring has flown the nest, against the ease and energy of new love and new life.

As much as LE WEEK-END is a study of committed coupledom, it is also a portrait of two individuals in the autumn of their lives. As Meg and Nick struggle to connect with each other, they face their own internal battles and fears that life has passed them by. Nick, in the aftermath of forced early retirement, reaches that the realisation that time is running out and he has not yet published a bestselling novel when his subordinate Morgan already has. He has also failed to find the financial success that Morgan basks in. Nick clearly struggles to express himself creatively in the outside world, in the same way he does within the comfortable confines of the hotel room – manifested by his impromptu montage on the bathroom wall and private iPod rock-out. Meanwhile Meg voices her dreams of running off to Italy to learn its language. Both seem to long to turn the clock back to their visit to Paris together as honeymooners, and throw off the shackles that having to be a grown-up creates. At times they achieve this desired youthful recklessness: running from a restaurant without paying the bill, and running up an expensive hotel bill that they can ill-afford. The urge to act their age, however, ultimately wins out, with visits to a graveyard and a church, newspaper reading and afternoon naps playing a major part in their weekend away.

What helps transform LE WEEK-END into a pearl worthy of a thirtieth anniversary celebration is its whimsical holiday mood. With a smooth jazz soundtrack and overall air of French romanticism, the film perfectly captures how it feels to meander through a foreign city, drunk on good food, in the soft-focus haze created by afternoon drinking. And that’s an element that audiences of any age can enjoy.