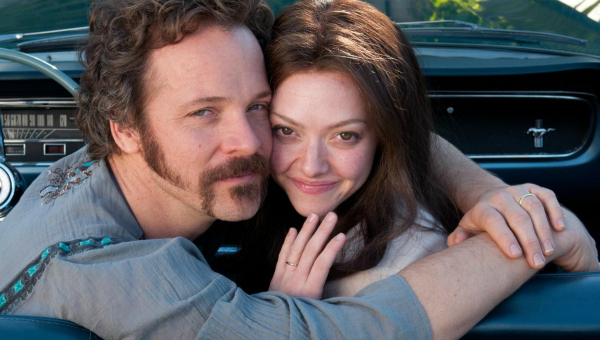 Linda meets Chuck outside a roller disco, and his posturing charm offers an escape from her overbearing Catholic mother (Sharon Stone). Soon after they are married, Chuck runs into financial problems, into which he insidiously entraps Linda by insisting they are “our debts”. A meeting is set up with sleazy porn producers Butchie Peraino (Bobby Canavale) and Garry Damiano (Hank Azaria). The pair are so impressed with Chuck’s homemade sex tape that Linda is cast in their latest work of art, DEEP THROAT, the story of a sexually frustrated woman who discovers that her clitoris is located in the back of her throat.

However, the narrative flashes back for the second half of the film to show the alternative reality, based on Linda’s 1980 autobiography, Ordeal. Here we see that behind the scenes, Traynor was a manipulative sadist who frequently beat his wife and had virtually blackmailed her into the industry. The nadir of his actions comes when he starts pimping her out to groups of men in hotel rooms to be gang raped.

Seyfried brings a powerful plausibility to the more emotionally turbulent scenes: at one point, a bloodied Linda tries to escape Chuck and is pursued down their suburban road until the police arrive to break up the disturbance. Initially they try to protect Linda, but when they notice that she’s “that blowjob girl” all duty of care is neglected and they simply ask for an autograph, and leave. However, for much of the film she is bland and vague – although this could be a subtle way of showing us how unconvincing and inappropriate a girl like Linda was in the world of adult filmmaking. Sarsgaard is suitably nasty as Traynor, his soft purr easily giving way to ferocious acts of cruelty whenever it suits his needs. It’s a credit to his acting that you feel great satisfaction when his debts finally catch up to him in the form of hired goons (although this is another example of the 70s clichés being too abundant).