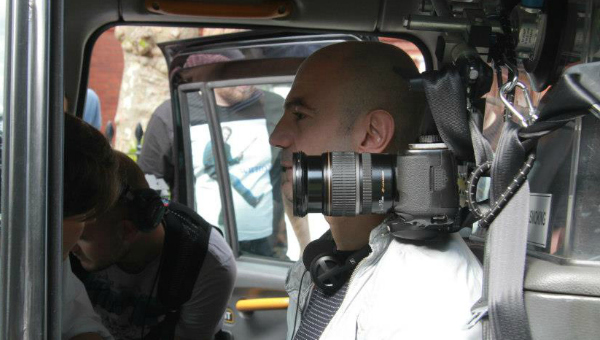 Imagine an episode of Reginald Perrin scripted by Eugène Ionesco and you might conjure the spirit of OUR NAME IS MICHAEL MORGAN, which screens on the opening afternoon of the Cambridge Film Festival, in a shorts programme tinged with absurd fantasy. Dominic Marsh and Gerard Cooke lead as a pair of door-to-door salesmen who find themselves battling an identity crisis and fighting over lonely housewives en route. Clever, philosophical, funny and original, it’s one of many strong submissions among this year’s featured shorts at the Festival. We spoke to director Maurice Caldera, whose work we’ll be keenly following in future.

Rosy Hunt: MM’s dialogue is very nuanced and needs strong performances to carry it. What is your directing style?

Maurice Caldera: I like to have as much time as possible to rehearse with the actors. Although the film was quite tightly scripted, it was important for me that the actors questioned the script as much as possible and explored the world that we were trying to create. This is especially true because the world of MM is quite heightened and the balance between the naturalism of the performances and the surreal nature of the world that they inhabit is vital if the film is ever to succeed. Dialogue is often a tricky thing, it can work against the actors because it is not always natural to them, but in this case the dialogue provided a rhythm and a key for the actors to enter into. It was a hugely satisfying experience for me as a director to watch these performances unfold.

I have so many plays, films and stories that I am keen to tell…

RH: As an author you have been compared to Kafka, Camus and Gogol, whose influence is ubiquitous in modern cinema and theatre. Do you have any less obvious influences/role models?

MC: These are big compliments here! Like most writers, I love good writing. Apart from these great European writers, I also love the balance of poetry and naturalism of contemporary American writers, Franzen, DeLillo, and Lorrie Moore, whose wonderful novel, A Gate at the Stairs I have just finished; and less contemporary American writers, Steinbeck and William Maxwell. And I always have time for the short stories of Katherine Mansfield, which I have loved ever since I read them as a teenager.

RH: Have you worked with Dominic Marsh before?

MC: No, this was my first time, but I hope, not my last. He understood the role and the tone of the film from the very first meeting. He brought a sympathy and a soft spoken naturalism to the character which is central to the whole film. Gerard Cooke as his nemesis could then play it up slightly and have fun with his role, which is what he did.

RH: Who composed the excellent soundtrack?

MC: I get so many compliments about the music and rightly, it is such a strong component of the film. It was composed by a very talented composer called Matt Kelly, who I was lucky enough to be at the NFTS with, and who I am working with again on my second film, CAMILLA IN THE LOOKING GLASS.

RH: Have you worked in theatre, or would you be tempted to direct your own material  – or other people’s work – on the stage?

MC: I am writing a play at the moment, which I would definitely hope to direct in the future. I have so many plays, films and stories that I am keen to tell that it is almost difficult to imagine interpreting someone else’s work, though I think that might be a really useful thing to do.

RH: Can you update me on the progress of your film I, HARLEQUIN?

MC: “I, Harlequin” is an Italian language film which I have co-written with the director Matteo Bini. It is about the relationship between an ageing Commedia Dell’arte actor and his TV presenter son; it is about the clash of new and old Italy. The film is scheduled to be shot in the Bergamo region of Italy where the character of Harlequin is said to originate from, in mid September.

OUR NAME IS MICHAEL MORGAN screens as part of the LIFE DISTORTED programme of shorts on 19 September at 17.00 and 28 September at 23.00. If you buy a ticket for this or any other shorts programme, you will be able to watch JUST BEFORE LOSING EVERYTHING (AVANT QUE DE TOUT PERDRE), a powerful standalone short which we strongly recommend.

One thought on “Interview with Maurice Caldera”