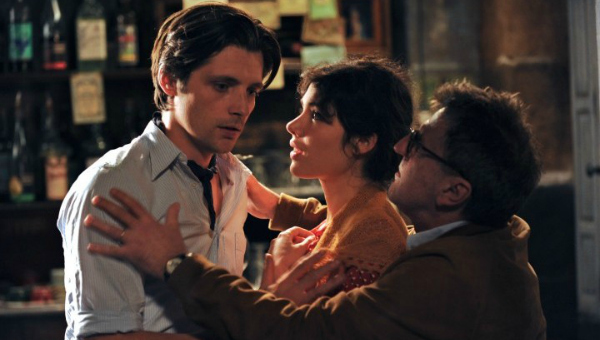 Opening up onto the Old Port of Marseille, MARIUS begins with 18-year-old cockle merchant Fanny (played by a gorgeous Victoire Belezy) approaching ‘La Bar de la Marine’, home to her childhood friend and love of her life: the roguish Marius (played by Raphaël Personnaz).

For all intents and purposes, Marius is portrayed here as a 1930s’ French port-town amalgam of Mickey Rourke and Flash Gordon: a camp, neckerchief-wearing, chain-smoking oddity who is inexplicably considered charismatic. Marius cohabits and runs the bar with his father, the owner César (played by veteran actor Daniel Auteuil, also responsible for directing and adapting Marcel Pagnol’s original stage plays for screen). César is a reserved father who talks to his son about very little besides the ins and outs of running the bar, but over the course of the films he throws his inhibitions to the wind to become a reliable and wise voice of reason amid the operatic chaos.

Every single performance dazzles and each character takes on a whole new trajectory.

Marius has his George Bailey moment of wanting to shake the dust of this crumbly old Marseille off his feet; circumstances change, irreparable mistakes are made, Shakespeare-esque misunderstandings are ten-a-penny, and a true turn-of-the-century melodrama unfolds. Any trepidation one might have harboured upon watching the opening half of MARIUS, which begins like a French Richard Curtis film, quickly disappears as the story develops, and is entirely dispelled by the time FANNY rolls around. The drama is in full swing by this point: every single performance dazzles and each character takes on a whole new trajectory.

For those unfamiliar with the original source material, an alternative reference point is the excellent silent film of the same era on the other side of the Atlantic – Frank Borzage’s STREET ANGEL. Similarly to MARIUS and FANNY, STREET ANGEL is a melodrama born of the jarring conservatism in social attitudes towards women at the time –  expectations which could not legitimately exist in the 21st century. A ‘street angel’ (the film taking great care to never refer to the character as a prostitute) works the street to pay for her ailing mother’s medicine, only to be caught soliciting, and promptly has to make herself scarce. She falls in love and tragedy befalls her along the way, ultimately resulting in her arrest. MARIUS and FANNY can be seen as part of an operatic trilogy that aims to revive this kind of filmmaking in a digital-era period drama, keeping its footing in the golden age of cinema whilst compromising none of the accomplishments digital cinematography and sound reproduction are capable of.

MARIUS and FANNY are screening as a double-bill at Cineworld, 2pm on Saturday 28th September. Click here to buy tickets.