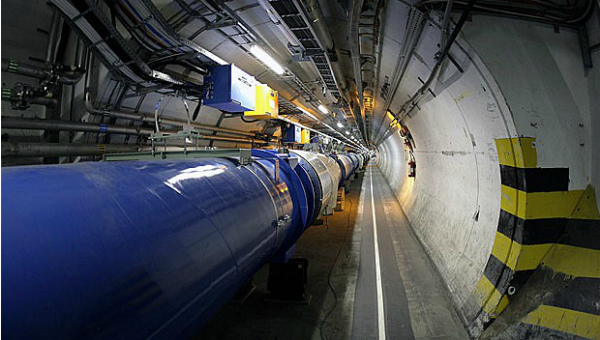 Science and the popular press have become somewhat uneasy bedfellows over the last few decades. With the halcyon days of space exploration behind us, the forefront of scientific endeavour now lies below the ground, attempting to understand the early formation of the universe and the building blocks of matter itself. The Large Hadron Collider (LHC) is a seventeen mile ring under the Swiss countryside that represents the most significant – and expensive – collaboration between nations in human history. Attempts to make the significance of this digestible for those outside the scientific community have led to the coining of terms such as “the God particle” to impart the significance of the potential findings, but Mark Levinson’s documentary attempts to redress that balance with an exploration of the scientific significance in more meaningful terms.

The LHC features four separate experiments at various points on its circumference, and Levinson follows six physicists spread across various levels of the project, woven into a single chronological narrative. The history of the project has been widely covered by the media, and Levinson charts the period from the initial activation of the equipment in 2008 and its almost immediate failure, through the years of delays and frustration, to the most significant discovery so far made in 2012. The enthusiasm of the scientists is readily apparent, but so too is their knowledge and expectation that the timescales required for such a project encompass most of their careers, and with it the risk that those careers may have been in pursuit of the wrong theories.

PARTICLE FEVER is a significant success in sharing the fervour of the scientists at the cutting edge of understanding.

Throughout the process, the media cast an ever-present shadow over proceedings, keen to digest the latest findings, and one group of physicists observes that the scale of the project now means that news of discoveries can be found on social media even before it’s heard through official channels. At the heart of PARTICLE FEVER is this relationship between science and the media, with the project recognising the need to explain discoveries but frustrated and often inhibited by the pressure to report them in real time to a waiting world. Neither that, nor the potentially catastrophic failure of the project’s cooling system just a few days after activation ever seems to dampen the enthusiasm of the participants, an energy which Levinson channels into the main thrust of his narrative.

Levinson has a key collaborator in harnessing that energy, in the form of fellow physics enthusiast and world renowned editor Walter Murch. While Levinson’s access to his physicists gets to the very heart of the project’s key research, Murch’s editing gives the story real momentum as it drives towards the big discoveries. Levinson also succeeds brilliantly in removing the simplification of the LHC’s impacts but still leaving it digestible for a wider audience. The ideas are well supported by clear and simple graphics which illustrate the two competing theories of existence posited by competing theorists, and the impact that the proof of one theory or the other could have on the long-term future of physics and our understanding of existence. PARTICLE FEVER is a significant success in sharing the fervour of the scientists at the cutting edge of understanding, managing to stimulate without over simplifying and it’s a fitting testament to the both the theoretical and practical achievements already produced by the Collider.