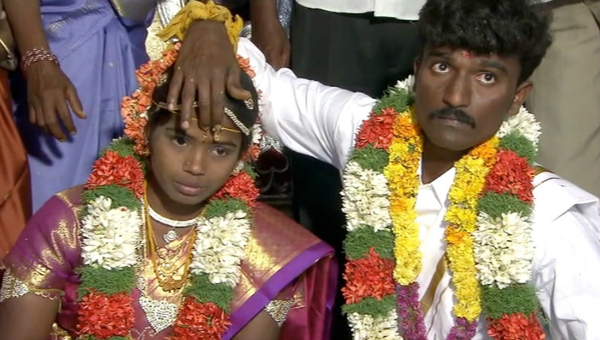 No sooner have the houselights gone down than SALMA lays everything out on the line: wholesomely honest, plucky documentary filmmaking on a shoestring budget is the nature of the game, and the plight of seen-not-heard Tamilian women is the focal point. This is not confection filmmaking: it does not exist to entertain, nor does it exist to express a filmmakers yearning to have their creative voice heard. It is an awareness piece that is distressed and needs you to be distressed along with it.

SALMA follows the poet, state politician and activist Salma – ostensibly a one-of-a-kind in Tamilian society – returning to the village she grew up in. ‘Grew up’ being the only accurate way of describing her upbringing, as she wasn’t cared for nearly affectionately enough to say she was raised. We see the cellar room she was incarcerated in for 9 years, following on from her starting puberty and prior to her duplicitously coaxed acceptance of a destructive arranged marriage. Her experience of the outside world for those 9 years came from a small window (to which on return Salma muses: ‘Why did we have a window at all? You can’t see anything’), and scraps of newspaper that came as food wrapping from a nearby market. Often, these would be thrown away and Salma would root through the bins to read them, such was her hunger for the written word. The end of this painful era was signified by nothing but the hollow fanfare of a wedding (very telling photographs of which are included in the film) and a changing of the gatekeeper from remorseless parents to a volatile husband.

“[My husband] bought some acid and threatened to pour it on my face. I was so scared. So I slept with my son shielding me.”

The real heart wrenching truth at the centre of the story is that none of the guilty parties have been held accountable for their actions, and Salma, though outspoken and unabashed in other aspects of her life, cannot (or will not on film for the sake of tact) bring herself to confront these people with much conviction. The conservative patriarchal forces who are the most at blame – her father and her husband – are both cited as becoming ‘milder’ or ‘calming down’, yet in their presence even a personality of such strength, and a person with such clearly vitriolic feeling towards these figures wilts into passive timidity – the remnant memories casting long shadows. “[My husband] bought some acid and threatened to pour it on my face” Salma recalls, “I was so scared. So I slept with my son shielding me.” With anecdotes like these Salma laughs, not out of amusement or even nervousness, but seemingly out of rote reaction learnt in order to dismiss or subdue the pain of these memories. Further to the echoes of suffering still ringing around the household in spirit, there is a physical manifestation of measurable pain represented in the now by the attitudes of her sons and the son of her sister, all of whom are being raised in the village that Salma and her sister have long-since abandoned in moving to the more forward-thinking city of Chennai. They have never read her poetry, though they intensely study her male contemporaries; they are vocally disappointed that she doesn’t wear the burka; and are generally embarrassed by her independence and radically modern lifestyle.

This screening of SALMA is timely with regard to the treatment of women in the international limelight. Outrage is at an apex this month with the high-profile trials surrounding two harrowing cases of gang rape in India – one of a female photojournalist in an abandoned textiles mill in Mumbai, the other the gang rape and murder of a student on a bus in New Delhi that has led to death penalty sentences for the convicted parties. The global community is uproariously distressed by the welfare of women in India over the passing weeks, to which SALMA stands as an invaluable resource of insight on the problem’s genesis in at least one particular region. Elsewhere this month, on the other side of the Arabian Sea, it cannot be overlooked that Yemen is looking to reform its arranged marriage laws after the case of Rawan, an 8 year old girl who died from injuries sustained by the consummation of her arranged marriage to a man 5 times her senior. While this case is in tribal Yemen, a country whose laws are in a more desperate situation given the reluctance to agree on an age of consent, the problem at its core which is hampering proper tackling and progress is touched on in SALMA. One can’t help but bear Rawan’s case in mind during a strikingly uncomfortably scene when we see footage of a vulnerable young girl’s wedding to a much older man, whilst Salma recites one of her frank and bitter poems on the subject.