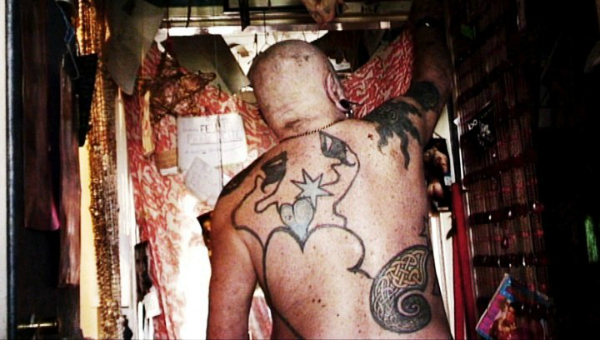 This is a film about mental illness.

This is a film about love.

This is a film about “Trust. Absolute. Unconditional”.

Most of all, this is a film about Drak.

Drako Zarhazar has what appears to be anterograde amnesia. He lives entirely in the present, unable to create new memories after two near-fatal road accidents. He is THE MAN WHOSE MIND EXPLODED. Filmed predominantly in his cave, haven, call it what you will, of a council flat, this touching portrait follows ageing maverick Drak as he goes about his everyday life, or rather his every second. It is heartbreaking and refreshing in uncomfortably equal measure to see Drak, unable to recall the last word spoken to him, let alone what he did yesterday, living each moment of his life entirely in the present. He appears to be content in this mode de vie which he has not chosen, yet there is a sense of desperation in the way in which he copes with not being able to remember. This tiny room is his entire world, strung up with notes to himself and from others, pictures and mementos covering every surface from ceiling to wall to floor. We are seeing, in the access granted by the camera, right into this man’s utterly unique mind.

Though it might break your heart there comes a point when you have to just “let Drak be Drak”.

And is Drak an outsider if he does not recall anything to be outside of? He is aware that he turns heads as he walks through the streets of Brighton, “exhibitionist” that he is, but does not remember from one moment to the next. Even after his dear sister comes to stay, when asked if he has enjoyed the visit he responds “I don’t know”. And Toby Amies, the maker of this documentary, is new to Drak each time they meet, despite the relationship they have built and the “dear friend” he has been to him.

So how does Toby feel about this, and how do Drak’s family cope with wanting so much to help him but being powerless to do so? As Toby says, though it might break your heart there comes a point when you have to just “let Drak be Drak”.

3 thoughts on “The Man Whose Mind Exploded”