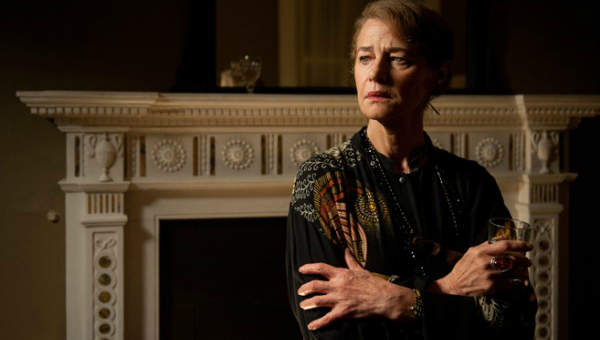 Stephen Brown’s THE SEA is intense. It begins with a man staring out to sea, and the tempestuous emotions which doing so can drown or bring up in waves. This is an opening which indicates what is to come, partly, yet one cannot anticipate the depth with which we are to feel as an audience.

THE SEA is the tale of a broken man surviving one loss by revisiting another. Adapted from the John Banville novel alongside the author himself, the story follows art historian Max Morden (Ciarán Hinds) as he copes with the death of his photographer wife Anna (Sinead Cusack). In the hauntingly idyllic setting of a faded seaside village, we see him relive memories of a childhood summer once spent there, a summer flooded with excitement and strange glamour and tragedy. This is no messy flashback movie, however (a risky feat, even the director himself admits), as we are taken back to hazy days in a manner that seems truly natural in transition. Soft light and colours and sunlit tracking shots abound, as the young Max (Matthew Dillon) runs about smitten after the mysterious and fabulously chaotic Grace family, falling in love with the madcap charm his own only-child family lacks, as well as with the spoilt Chloe and, one senses, her flighty mother (Natascha McElhone).

A tale both harrowing and tender, told in sensitive elegance and intensity.

This happy summer haze is interspersed with darker days, however – both those of Max’ present lonely drunkenness and his last heartbreaking weeks and tensions with the terminal love of his life. Three lives are lived out here in one, each as tragic and beautiful as the next, as touched with grace and sadness.  A spare, understatedly soulful violin and piano score only serves to accentuate the depth of feeling with which each is tainted and blessed.

A tale both harrowing and tender, told in sensitive elegance and intensity, THE SEA possesses a quietness of muted grandeur, an emotive rhythm which ebbs and flows with the tide. The film ends as it begins, with a man staring out to sea, and the tempestuous emotions which doing so can drown or bring up in waves.