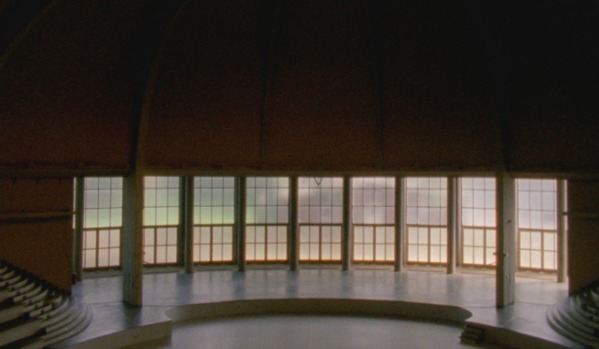 Lucy Harris’ CROSSING POINTS is sparse and intent on detail, formalist yet utterly human. There is a keen sense of colour, blue and bright and clear. Taut lines and elastic tension, visual yet muscular and tactile, are accompanied by violin strings. Bowed fencing foils bend to follow remembered running-track lines, and spring back quick to record lap times. Drama escalates in chapel-like reverence, at once anxious and calm, as architecture is caressed by the camera and inhabited by the mind’s eye. This is a dance, the choreographed movement through space of both actors and the camera. In watching, the viewer is also drawn to think about their own sense of being in space, made more aware of their own body and breath, even as they sit still and watch the movement of others.

There is real presence here. The indexical nature of 16mm analogue film necessitates camera and subject being there in one time and space, light bouncing off objects and architecture and fencing figure alike, thereby inscribing them onto the very skin of the film. And the viewer, in being with the product in their own present, is brought into the present of the time of shooting, sharing the experience the filmmaker had in that space. Just as what we see promotes our very physical relationship with architecture, so does its very medium establish a very physical liaison between film, filmmaker, place and viewer. Horizontal boundaries of time are transcended, vertical layers of time constantly established and extracted.

Filmed in the dual locations of the empty 1936 Berlin Olympia Stadium and Kuppelsaal, CROSSING POINTS shows two fencers jousting and prancing through the heavy significance of these spaces in which so much history is inscribed. Here our innate sense of scale is corrupted, the psychological nature of stadium architecture exposed. Here the individual can become a mass, can be drowned and elevated at the same time. There is an intense atmosphere akin to the baited breath experienced watching competitive sports – the pride of a nation riding on the achievement of an individual.

Yet we snatch only glimpses, no real event solidified. Ambiguity reigns.

We see in this film a space which we think is familiar, of which we think we know the narrative – but history is complicated, stories multiple, and truths unclear. We are confronted with, but can never truly access, the memory of space – what the walls themselves have witnessed, the stories they have to tell. Events are indexically inscribed on bricks and mortar and rows of seats. Yet we snatch only glimpses, no real event solidified. Ambiguity reigns. Visual motifs are repeated and parallels embellished, as the mind boggles and investigates imagined event in real image. This is a reflection, perhaps, of the way in which the media (re)presents events – the coverage of Jesse Owens in the 1936 is the foundation of the journalism and media we know today. The many are shown what the few want the world to see.

CROSSING POINTS is not just a visual and phenomenological experience, then. It questions the very nature of space and history, and things we are told. It also features an impressive score by a Cambridge-based composer, in which we hear not the atmosphere of those places we are shown, but something else, something other, pulling the film out of the idea of the direct document. Things are not always in sync, the music not leading the image nor the image leading the music. Harris was keen to give the composer space to create a complete musical space, to complement or contradict those grounded in the physical. The music adds yet another layer to the film, another narrative, another suggested memory in the multiplicity of history, adding to a set of sometimes conflicting stories and variously remembered events.