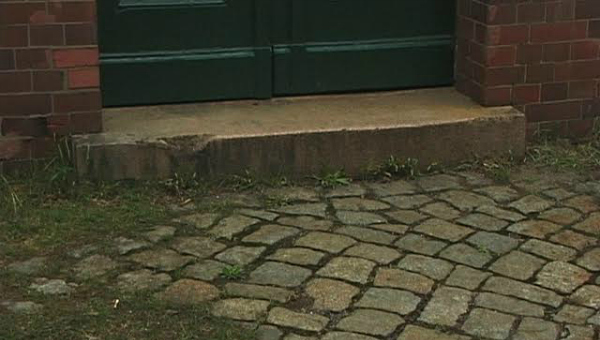 ‘In Summer, we used to swim in the lake, have picnics and take photos of one another. We sunbathed and held hands.’

Snow-frosted trees rest in quietness, but for howling birds and runners’ muffled footfalls.

‘When you pass by here, you hear screaming.’

‘Nowadays one can be so afraid of life.’

A young girl in a woollen hat, awkward and posing and silly.

‘Today I heard music and the music was ugly. I used to hear screaming’.

The poignant dance of alligator scales through water, eloquent and cold.

‘And I wanted to tell you, I used to pass by here, ten minutes from my house. Can you imagine?’

THE VIEW FROM OUR HOUSE (Anthea Kennedy and Ian Wiblin) is a recollection, of sorts, of the early years of National Socialism in Berlin. Inspired by the diaries, notebooks and photographs of filmmaker Kennedy’s Aunt, Erika Koch – a young photographer who lived nearby to a prison in Berlin-Templehof – the film evokes a sense of memory inextricably entwined with its environment through image, words and sound. Combining these found photographs with new imagery of these spaces as they are now, the filmmakers excavate a sense of time in image.

We see, as they saw, a lone bluebell, a pine cone, a scuttling bug across anonymous, empty epitaphs. Unnamed graves are littered with flowers, dead grass and gum. A few are graced with no stone at all. Yet here, each man, woman or child lost is honoured with equal remembrance, no stone left unturned, as it were, by the watchful eye of the camera. The video format lends itself to the thoughtfully meticulous manner in which a full collection is made, no grave, blade of grass or door handle privileged above another. None is left behind.

And yet, there are many things left untold, many angles left unseen, many things left unsaid. Wide shots are deliberately avoided, the focus firmly fixed on detail, reminiscent of the recording in Erika’s notebooks of her small visual remarcations of her everyday. It is the minutiae we see here, not the whole brutal picture. The camera fixes its gaze doggedly downwards, avoiding the sky, and thereby any sense of establishing the image in context. While the construction of the film is honest in the way in which it discloses its own structure, one senses a holding-back, a suggestion that perhaps this is really about what we don’t see, the ways in which silence may be articulated. In this place, where 2000 pairs of footprints entered, far fewer passed through those green-painted doors again, and were instead tortured or killed, condemned never to leave. In this place, weeds have now grown and black bins been planted. Crazy paving papers over the cracks in human history. In this place, now silent but for wind and car-murmurs, one ‘used to hear screaming’.

Repetition, whether in phrases spoken or places revisited, is a key feature in the film, reflecting the recurrence of traumatic memories…

Yet in THE VIEW FROM OUR HOUSE, one girl, and thereby many, is given a voice. She speaks for all those who screamed, and all those who passed by. Though nameless, she is not faceless, her likeness repeated in found portraits throughout the film – her life recalled through the pictures she took with her beloved camera and visits to the places she once knew. An accented voice reads, in the English which Aunt Erika ‘always used to speak’, a narrative woven together from her unsent letters, her notebooks and her diaries (as well as various other sources). She speaks with all the earnestness that only a 17-year-old girl can muster: ‘What if you and your parents are asked to leave? Who will look after the alligators?’ She addresses a ‘you’ who is ambiguous – does she speak to us, the audience? Or to herself, a future self invested of the wisdom afforded by longer spent in life? Spoken in English, this ‘you’ is granted an anonymity which in German would be confiscated – an anonymity perhaps comparable in some small sense to that of the prisoners who used to scream, or those laid to rest in unnamed graves.

Details and technicalities of the medium of photography intersperse more emotive thoughts, emphasising a sense of the necessity of an indexical there-ness, connecting photographic image to time and space. Some statements are emotive even in their matter-of-factness, unintentionally and poignantly evocative of certain aspects of the National Socialist regime – ‘if your negative isn’t sharp, the best solution is to reject it’.

Repetition, whether in phrases spoken or places revisited, is a key feature in the film, reflecting the recurrence of traumatic memories, and punctuating a sense of endlessly passing time. Places are returned to, shots taken in the prison’s active years and our own, by day and by night. There is a sense of rhythm, a disrupted linearity which questions the supposed linear nature of history, and of time itself.